and then open test from the context menu 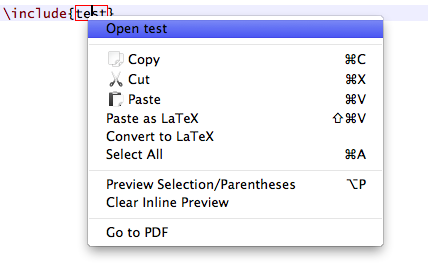 Is it possible to create a user macro (or similar) to open a file from the latex search path?

From the command line, I'd use

to open them. I tried to write a texstudio user macro

(and for simplicity had .tex included in the selected text) however this leads to an error

I'll be addressing the main question: Is it possible to create a user macro (or similar) to open a file from the latex search path?

Really, the whole issue is that TeXstudio does not (by default) involve the shell when executing its commands, which includes the system(...) command used in your user macro. This is outlined in the TXS user manual, under Section 1.3.2, Shell functionality. So in order for your commands (denoted by <cmds> below) to run as they would in Terminal / Command Prompt, you would have to invoke shell explicitly in your user command:

as per the User manual.

With that in mind, the rest is fairly simple: the result from cursor.selectedText() can just be concatenated as you would a string in the argument for system(...).

In your case (Mac OS), something to this effect will suffice:

Do note the placements of the quotes (single / double quotes) in the above command.

Not the answer you're looking for? Browse other questions tagged texstudio or ask your own question.

2
Loading files included from miktex user root path
3
TexStudio disable file monitoring?
9
Open several instances of TeXStudio
6
Export and import macro files in TeXstudio
0
TeXStudio: Create a command that opens a PDF file with a name based on that of the main tex file
0
Latexdiff TexStudio macro mystery
2
How to add External Bibtex File to Autocompletion List in Texstudio?