I know from this and this question that LaTeX won't hyphenate a word that already contains a hyphen.

This can be circumvented by using the extdash package that provides a special replacement that can be used instead of a hyphen that won't stop the word from being hyphenated.

My question now is whether it is possible to make normal hyphens behave in that exact way. I don't want to have to write all my hyphens in a special way. Instead I want LaTeX to apply that behavior automatically (unless I use a special hyphen-command for that exact purpose).

Is this doable? And if yes: How?

Traditional typographical practice is to avoid hyphenating such words, so such a rule was coded by Knuth into the TeX program.

However, it is still possible to insert a hyphen that allows breaks, by fooling TeX into thinking we have two separate words (by inserting empty glue). This can be quite easily done if we're willing to type a special sequence like \Hyphdash or \-/ instead of a hyphen, which is what is provided by packages like extdash. But if we insist on typing regular hyphens into the TeX file, then “classical” TeX engines (meaning, other than LuaTeX) provide only one way of having regular hyphens be treated as something else, and that is to change the catcode of - to active, so that it becomes a macro that expands to something longer. But this would cause problems whenever - is used anywhere other than regular text, which is quite common (see examples of the problem in Steven's answer). I imagine that if a good solution existed for this in the classical TeX world, some package like extdash would have covered it.

(Actually, there's a perfectly sensible approach which for some reason is not very popular in the TeX world: and that is to preprocess your input file with some “smart” external script, replacing only the hyphens that occur in regular text with \Hyphdash (or its expansion) or whatever. But for some reason, people want to do everything inside TeX.)

With LuaTeX, which allows greater access to TeX internals, a lot of things become possible, and a lot of catcode and macro-related headaches are gone. For example, LuaTeX has a hyphenate callback which can be used to modify the regular hyphenation it does. This callback gets a list of nodes, into which we can insert discretionary nodes (hyphens) wherever we choose. This is much easier than having to do everything with macros (it is hard to set up appropriate input which later expands into exactly what we need, with no other interference). And there's even a lang.hyphenate function, which we can use to simply do what the regular hyphenation does.

and just put \directlua{require('hyphenateall')} in your .tex file.

For example (borrowing the example from Steven's answer): 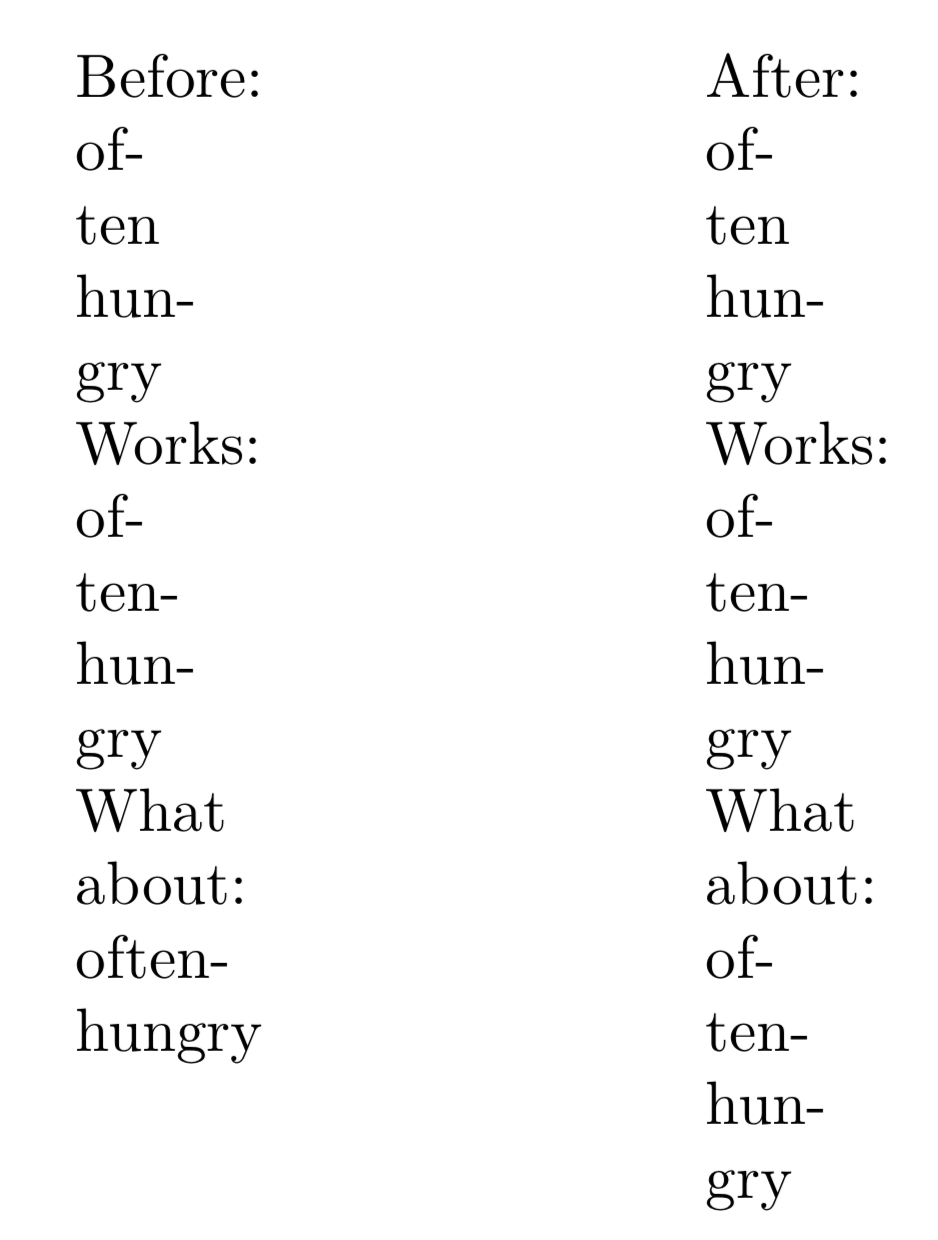 Note that after the \directlua call, we did not need the special syntax to get the extra hyphenation.

You can do it by changing the catcode of -, but that breaks all kind of stuff, since - is not only a dash but also a negative sign in math (as well as a dimensioning sign, as in \kern-1pt, \vspace{-\baselineskip}, \rule[-1pt]{1pt}{3pt}).

So this MWE below is a mere demonstration, not an actual recommendation. Shown in the MWE for two zero-width minipages, without then with active -. 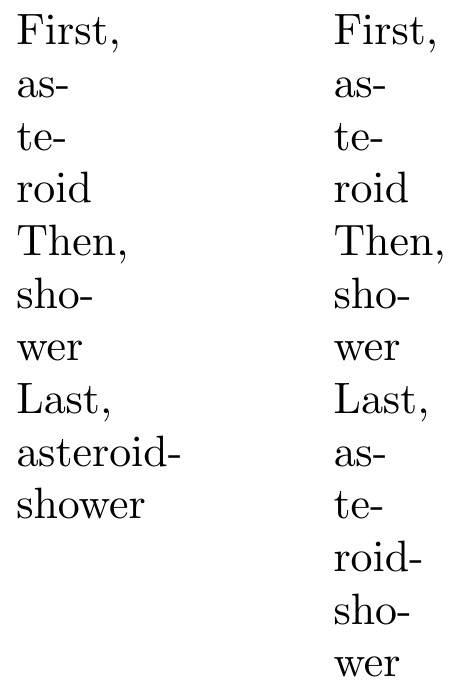 Therefore, the better approach would be to (as noted for the extdash package), assign a special macro to be this special type of hyphen. Here I choose \?, resulting in the identical output as the prior MWE:

114
Adequate hyphenation of words already containing a hyphen
36
Why can words with hyphen char not be hyphenated?
19
"Lua tree" (analogue of texmf tree)
4
Asking latex to try harder to not split inline math across multiple lines
27
What explains this discrepancy between LuaTeX and other engines?
4
Hyphenat not hyphenating words with hyphens

7
amsmath nobreakdash definition to allow normal hyphenation
15
Hyphens at end of line disappear upon pasting, even if they were present in the input
6
How to hyphenate a reference that has a lastname with a hyphen?
19
Add hyphenation pattern for word with special characters
12
Why does titlesec cause bizarre line breaks within \paragraph?
24
It doesn't hyphenate words ending with “—”
5
eco package causing illegal hyphenation
7
Can I have an "almost-non-breaking" space in LaTeX?
6
Typesetting very long words with hyphens inside