I am currently using Latin Modern Math fonts on LuaTeX to get a complete set of math fonts. In particular consideration is the ability to use bold greek \mathbfup{\lambda} fonts and bold calligraphic fonts \mathbfcal{F}. I was wondering if there is another fonts which supports all such symbols?

Here's an overview of how 11 different unicode math fonts display \mathcal{F}, \symbfcal{F}, \lambda, and \symbfup{\lambda}, plus XITS-Stylistic Set 1 and Asana Math Alternate. (The 11 math fonts were chosen primarily because they happen to be available on my system. Your system may have either more of fewer unicode math fonts.) Feel free to adjust the contents of the \blurb macro to feature the symbols you're really interested in.

In the screenshot, you'll notice that Neo Euler doesn't feature an upright-bold lambda symbol. This isn't really surprising, since the Euler math font is an upright (as opposed to "slanted" or "sloped") font anyway.

In addition to judging a math font by the completeness of its symbol set -- of course, no font's collection of symbols can ever be truly "complete" -- you should also think about whether the appearance, or look, of the symbols (including sum, product, and integral symbols) satisfies your typographic needs. E.g., if for some reason you are required to use a Times Roman text font, and if you are required to make the math font mesh reasonably well with the text font, visually speaking, you should probably restrict your search to Stix Math, Stix Two Math, XITS Math, and Termes Math, as those are the math fonts based on/derived from Times Roman. 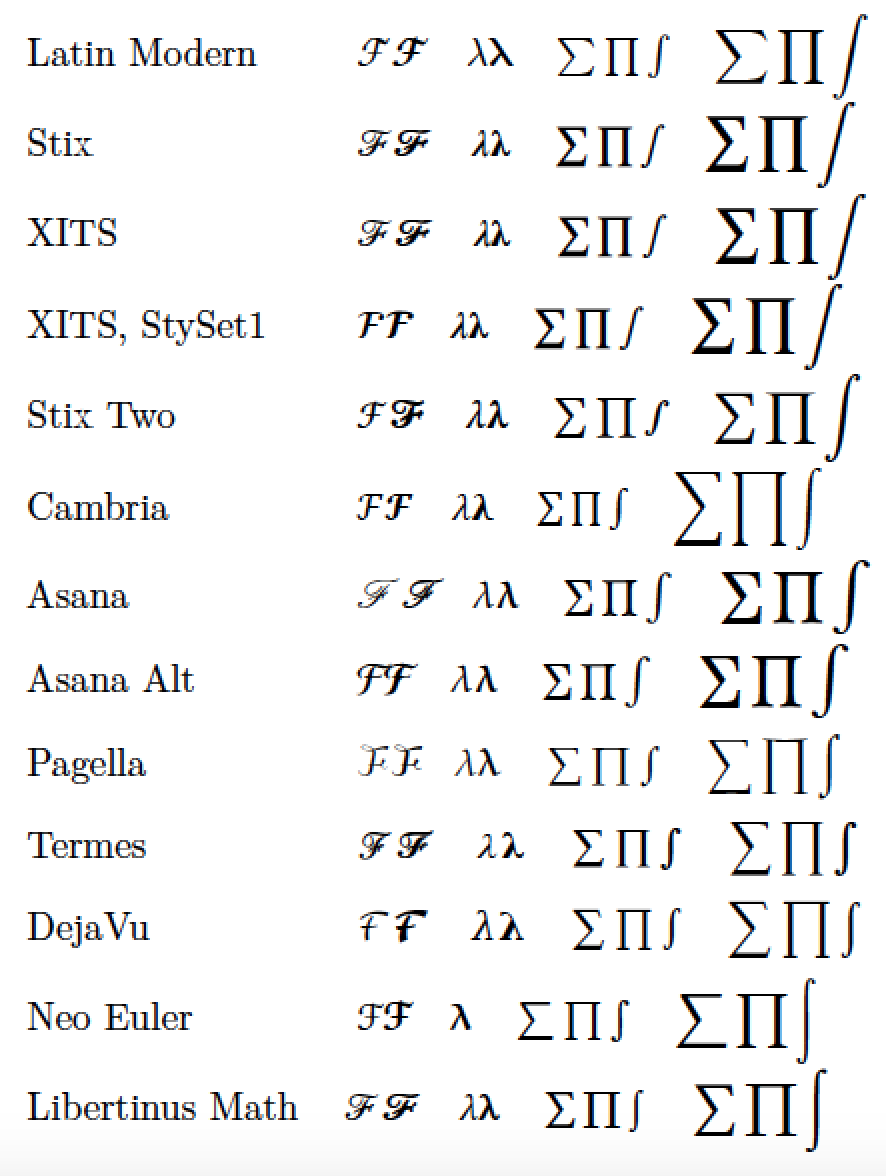 Since Mico graciously suggested I should expand my comments into an answer, I would like to add that there is another large class of math symbols available.

Many math fonts use the OpenType stylistic set or alternate font features to add variants. STIX Two is especially profligate with them: it comes with seventeen stylistic sets in addition to the default! These aren’t complete alternative fonts, but groupings of a few variants each.

I gave as one example in my comment, and Mico added to his answer, that you can use \setmathfont[range={\mathcal,\mathbfcal},StylisticSet=1,Scale=MatchUppercase]{XITS Math} in unicode-math to use the alternative script font from XITS Math for \mathcal and \mathbfcal. Some fonts use a different OpenType feature, shown by \setmathfont[range={\mathcal,\mathbfcal},Alternate,Scale=MatchUppercase]{Asana Math}. (This leaves the defaults in place as \mathscr and \mathbfscr: Unicode maps both the calligraphic and script alphabets to the same code points, but unicode-math can set them to different fonts should you wish to for some reason.) STIX Two Math has this and the other stylistic sets from XITS Math, but also quite a few others, including smaller variants for ∑ and ∏ in stylistic set 7, a more upright ∫ in stylistic set 8, and variant mathematical letters g, u, v, w and z in stylistic set 2.

You can set a stylistic set as the default, or set a range of characters to one as in the previous example, or replace individual code points. For example, I like to use Paul Halmos’ black “tombstone” for the Q.E.D. symbol, like DEK did (some of the time, including the 1997 edition of The Art of Computer Programming), and XITS Math has an attractive version of it at U+220E:

You could similarly test the smaller ∑ and ∏ in STIX Two with \setmathfont[range={"2211,"220F},StylisticSet=7]{STIX Two Math}.

There is also the option to remap a font to a particular math alphabet, such as Fraktur or blackboard bold.

The STIX Two stylistic sets are fully documented in a file called docs/STIX_2.0.0_stylistic_sets.pdf in the STIX distribution. You can also open any math font in FontForge and check for stylistic and alternate sets: stylistic sets have names such as ss01 and alternates, such as the one for Asana Math, are salt.

Not the answer you're looking for? Browse other questions tagged fonts luatex or ask your own question.