My goal is to be able to make font changes to arbitrary selections of text within a lstlisting environment by escaping to LaTeX and constructing the new font in the escaped section (is there a smarter way to make such font changes than such an approach?). However, I would like to be able to maintain a verbatim-like environment in the escaped section, in the sense that spaces are maintained and special characters don't cause a problem.

So in other words, I would like to create a macro altfont to do something like the following:

My first thought was to use a call to lstinline in the escaped section, but unfortunately this is not allowed according to the listings documentation. Using verb in this setting caused an error to be raised during compilation for me as well.

So I've tried to create my own macro to do the job as shown in the example below, but I can't quite achieve the desired effect. One problem is that I'm having is getting the macro to respect spaces, and the second problem is that some special characters cause the macro to choke (e.g. the % character).

Hopefully the example below will further illustrate what I'm trying to do.

Output from the compiled example: 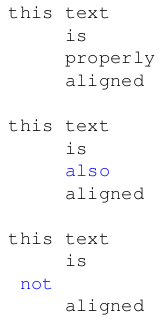 Multiple spaces are collapsed when TeX first reads the spaces and fixes their catcode. This happens when the macro is called, before the content is evaluated, because TeX has to read the argument. At this point \obeyspaces isn't evaluated yet, so it has no effect.

This can be fixed by moving \obeyspaces before the scan of the argument, so you can replace your definition of \altfont with

The \catcode lines are used to allow \ and % to be used in a verbatim-like way.

Defining commands with verbatim arguments gets easier with xparse. With this package, your document becomes

Not the answer you're looking for? Browse other questions tagged macros listings verbatim or ask your own question.