TLDR: I would like the coordinate shift specified at the start of a Tikzpicture to be interpreted relative to the western edge of the node above, rather than the center, but couldn't find how.

I am trying to create a horizontally growing Tikz tree in LaTeX with text at the nodes, and as the tree has quite a number of levels and some of the text can be somewhat long, I want to be as sparingly as possible with horizontal space.

I have set everything up more or less as I want it, but the problem is that the coordinate shift I set up for each new level seems to begin at the center of the text field, which means the horizontal shift for a new level can be much further than desired for wide text boxes. I would like to be able to set the coordinate shift relative to the west edge of the text boxes. Just setting anchor to west doesn't seem to work, because the line just elongates horizontally.

This produces the following result: 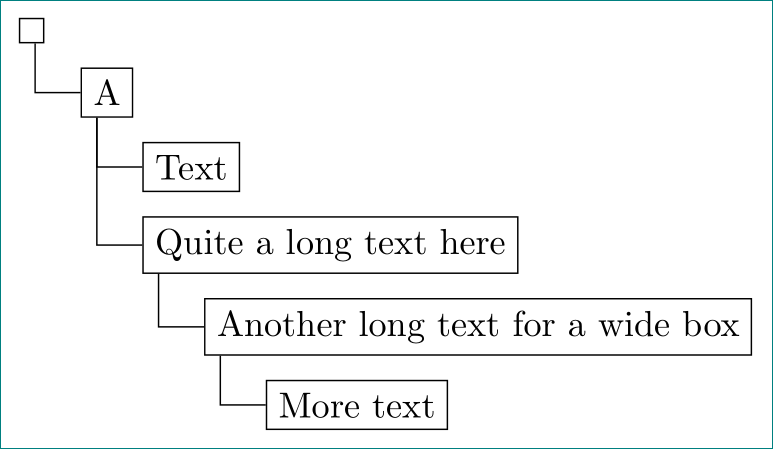 with forest package this is simple to obtain:

Not the answer you're looking for? Browse other questions tagged tikz-trees or ask your own question.

8
TikZ-tree: edge-alignment in horizontal org-chart
9
Changing the indentation of a Tikz tree
12
draw a many edge from a node- Tree - tikz
4
Right shift of a node in a tree
4
Node on the side of a horizontal tree
1
Edge error in Tikz Tree
4
Game tree in tikz - edge from parent node to label branches
3
Horizontal tree
3
TikZ (trees): How can I align children nodes in a tree on the same level
2
tikz tree use pic as tree node