A paragraph I am writing contains a lot symbols such as "{" or "_". To display those symbols as text instead of command, I have to write them as "\{" and "\_". Otherwise, Latex will say there are errors. However, there are so many of those symbols in my document and it would be very inconvenient to have to add a dash in front of them every single time.

Refer to the wikipedia link: usually, I just copy the link from my browser and paste it into my paragraph. But due to the "_" symbol in the word "Acacus_Mountains", Latex will say there is an error and ask me to enclose it with the "$" symbol.

About the \verbatim environment: it would not work for me because:

To illustrate, I will enclose my paragraph with \verbatim:

this is what my text looks like inside the \verbatim environment: 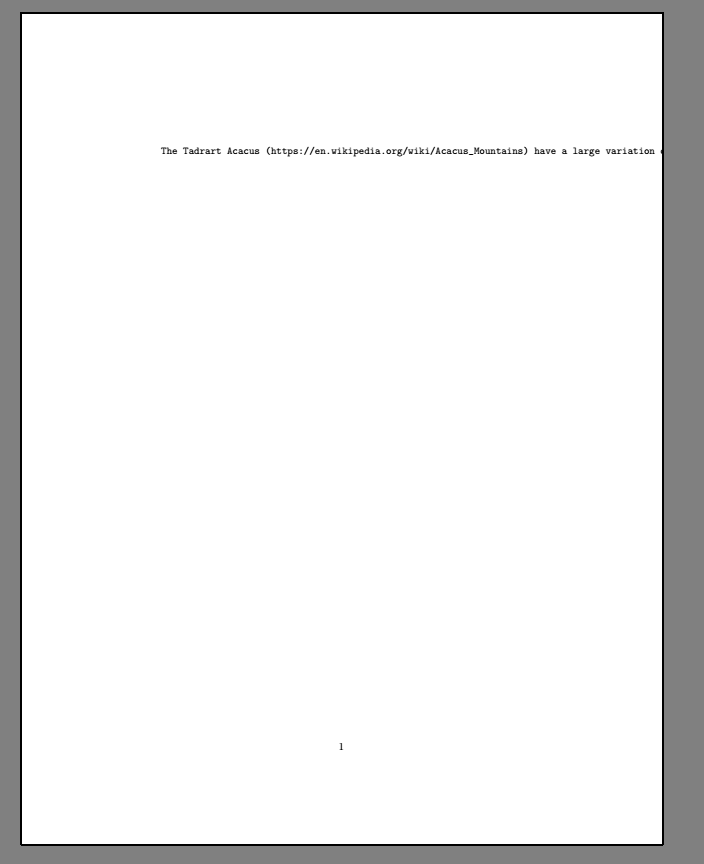 My question is: How to tell Latex that everything in a certain paragraph is to be interpreted as plain text?

Here's my understanding of what you want, based on the question and comments:

If this is correct, it may help you to understand what goes on normally. As TeX reads your input, it has a certain “catcode” assigned to each character. (See the answers to What are category codes? for more details.) Things with catcode 11 (“letter”) or catcode 12 (“other”) are simply typeset normally (specifically, they are treated as an instruction to typeset the glyph at that position in the currently loaded font), while others are treated specially.

By default, these are the characters that are treated specially:

Compare this to the output you get with something like alltt, which is just a bit better than verbatim:

The default behaviour of TeX/LaTeX, of having all those characters treated as special, makes certain things very convenient to type (entering math mode, subscripts and superscripts, defining macros, etc), but can be a “gotcha” for beginner users who just want to typeset text and don't want any of that yet. See similar thoughts by ConTeXt user Aditya on his blog: Some thoughts on lowering the learning curve for using TeX.

If the url package is loaded (preferably with the options hyphens, spaces, and obeyspaces) and the directive \urlstyle{same} is run, it's possible to encase entire paragraphs in \url directives. I wouldn't recommend it, though, as you'll lose hyphenation capabilities. For sure, if this were my document, I would apply \url directives only where necessary.

Not the answer you're looking for? Browse other questions tagged listings verbatim fancyvrb url or ask your own question.

65
What are category codes?
2
How I can make the “^”, “.” and “_” characters lose their meaning and rendered as normal text on truetype fonts

1
How to make my unusual environment accept one argument?
3
using fancyvrb Verbatim environment from within newenvironment
4
Using math mode escapes with listings enabled fancyvrb
14
Format a verbatim paragraph
2
How to preprocess code inside a listings (or fancyvrb) environment?
2
list environment lines being truncated
3
Line break long verbatim text with highlighted background
1
Verbatim write in Plain TeX
4
How to add externally stored link text into a hyperlink?