How to make \filbreak work together with \multicols? 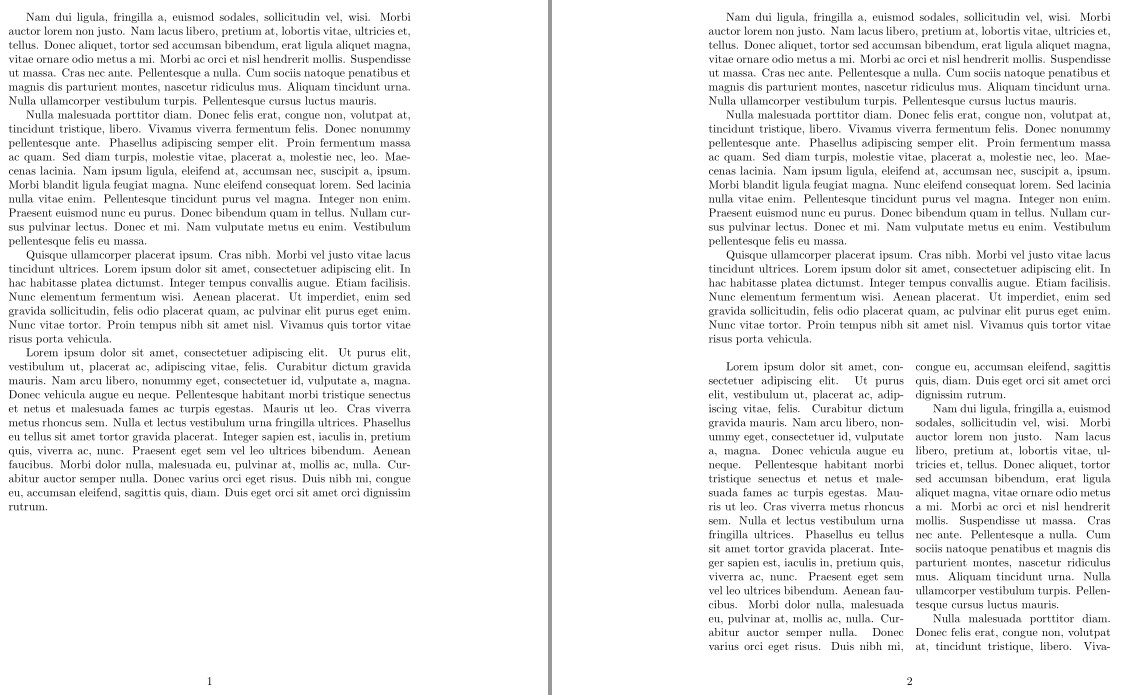 Why doesn't the third \filbreak introduce a page break so that the 2-column text is started on a new page? How to change that?

\filbreak while defined in LaTeX isn't really implementing a LaTeX concept but provides a simple mechanism (originally defined in plain TeX) for handling "simple" galley material. The stress here is on "simple".

Basically what \filbreak does is adding a vertical fill (stretchable whitespace) following by a penalty saying "this is a good break position" (-200 to be exact) then backing up by a negative stretch.

As a result a normal linebreak (which has a penalty of 0) will be less attractive as filling the page with whitespace. Thus for normal text the output routine will favor the \filbreak positions over other breaks so it wil usually jump from one \filbreak to the next. However, already a section heading may kill this as it will add a penalty of -300 by default, so depending on how close to the bottom that is and how much other wiste space is on the page it may be taken instead of the \filbreak point.

Now with multicol this totally breaks down, because what that environment does is:

You ask above, why doesn't it break before the environment when it isn't able to get all material on this page? The answer is a) it doesn't get any signal to break because of the above change in behavior from simple to complex OR processing and b) because even if it would get such a signal somehow it would need to process the whole environment first (or at least a good amount of it) to find out if that would fit and at the point of decision it simply doesn't have this data.

So bottom line the two approaches simply do not play together and there wouldn't be an easy way to change the multicol processing to start on a new page if there isn't enough space to fit the whole environment in.

Not the answer you're looking for? Browse other questions tagged page-breaking multicol or ask your own question.

8
How to control column/page breaks in multicols environment with nested lists?
31
Making a long table continue over two columns
106
Clearpage without pagebreak?
6
Avoid: multicol Error: Error saving partial page
13
Column break only if within first column of multicol
2
Conflict between multicol and arabtex
0
enumerate within multicols - center contents while keeping items labels aligned
5
Multicols inside Tcolorbox breaks page before long Multicols (and doesn't listen to pageheight)
2
How to place the figure caption to the left/right? Not aligning, but moving it