Generating an name index with \index{name@name and surname}

I am trying to generate an index of person names, which are used in a book.

On its first appearance, the person is introduced using it complete name (i.e. name and surname and maybe an additional explanation), later on in the text, only the persons name will be used.

I thought, it would be clever, to write the names via the \index-command using the @like this \index{#2@#2} (assuming, the persons name is always stored in #2, its surname in #3). So, for the initial appearance the index will look like this:

And this is the call for further appearances:

Unfortunately, Makeindex won't identify those as unique names. Even when I changed the second macro to use the @ also:

will show up as an second entry of the same name.

What went wrong, what must I change?

This is the unfortunate result, because, it contains two entries of Mr. Snow, despite the fact, that this is one person and should be listed as Snow, Charles Percy, 1, 2:

My solution stores the names and the potential description into an expl3 property list and takes care of the index format. If there is no description, the ordinary format is extracted, otherwise the description is added in the \index - call.

This way, the Index is 'compressed'.

I also used \NewDocumentCommand to provide for an optional argument at the end of \InitPerson. 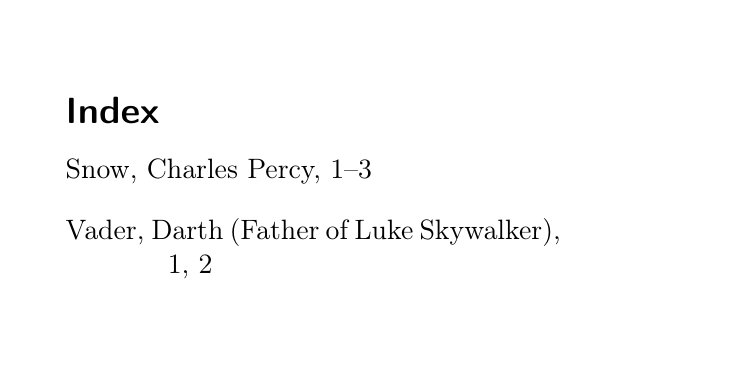 The part before @ is only used for sorting purposes, but \index{a@aa} and \index{a@aabb} are different entries.

The code proposed by Christian Hupfer can be streamlined. You should perhaps rethink to what happens when the first optional argument is given to \initpers.

Not the answer you're looking for? Browse other questions tagged indexing makeindex or ask your own question.

1
Problems to get Glossaries work for persons register

17
How do I include all authors of cited works in an index of persons?
2
Redefining ordering in index
7
Listing occurrences of a name through the document in one table
13
Index: Repeat first-level item on new column/page?
3
How to make an index of people used in the book (with references to page number)
3
index with additional information
2
douple counting in imakeidx
1
Better handling of person names in index
1
How to avoid pagebreak, and properly group <surname> <name1><name2><name3> with imakeidx?