Which measurement units should one use in LaTeX?

There are various measurement units that one can use (such as pt, mm, in, em, ex etc.) for specifying lengths and heights. For font-based units (em and ex) the actual spacing will vary slightly depending on the font. For the other types of units the spacing is fixed at the given measurement.

Is it better to prefer some of these units over others in certain situations? For example, is the "em" unit better than a fixed measurement when specifying lengths for indenting text eg. when setting xleftmargin, and xrightmargin in the listings package. When would you use the "ex" unit for specifying heights? I imagine fixed units should always be used when setting page margins.

So, I guess what I am asking is, what are the guidelines for deciding which measurement units to use?

There are no hard-and-fast rules, but here's a short list of guidelines:

Reading these answers, and comments to them, piqued my curiosity… Especially this sentence that Will Robertson wrote in his answer:

[...] I usually consider 1em to be about the same size as the font size in points.

It inspired me to investigate the actual behavior of TeX (or rather LaTeX). Since my findings could be of interest to those finding this question, I post them here.

I started of by checking what length 1em and 1ex are for different selection of Roman/Serif/Typewriter, Medium/Bold, and Upright/Italic/Slanted/SmallCaps. Here are the results: 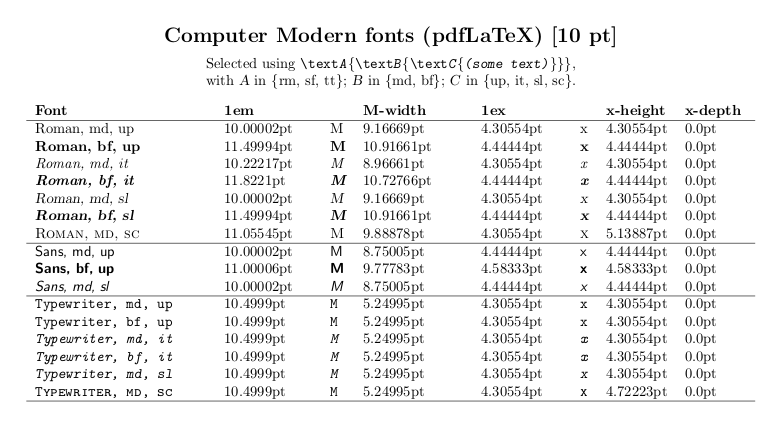 As we can see, 1em varies quiet a lot; from 10.00 pt to 11.82 pt. The length of 1ex is more consistent, with only three different values for all the different styles.

An interesting point of this table is that 1em is neither 10 pt (the selected font size) or the M-width. On the other hand, 1ex corresponds exactly to the height of an “x”, except for typewriter small caps.

[Xavier asked about the results for Latin Modern using pdfLaTeX, so I added this section.]

To check the values for Latin Modern using pdfLaTeX I added this to the preamble:

Some more styles are available, compared to Computer Modern, so I added them to the list. Also, the bold italic typewriter style was not available for Latin Modern, so I removed it. 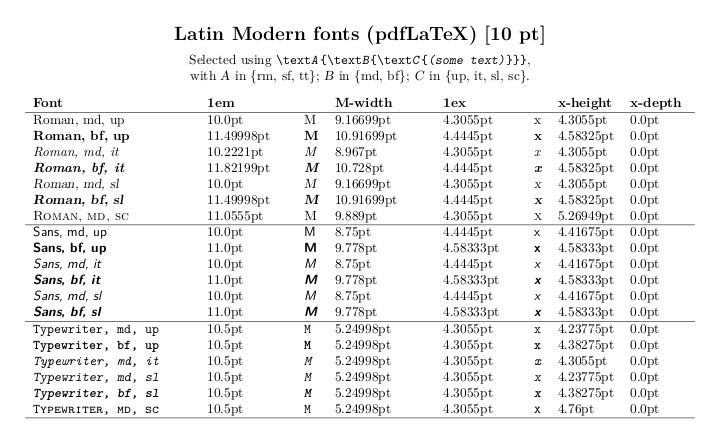 The values of this table corresponds to the values for Computer Modern to within a hundredth of a point for the columns 1em, M-height, 1ex and x-depth (all zero again).

This time it’s a bit different for the x-height values. For the most part they correspond to the value of 1ex. However they do not correspond for these styles: medium small caps roman, all medium sans, and all typewriter styles apart from medium italic.

Generating the above tables with XeLaTeX instead of pdfLaTeX, without changing the code, results in exactly the same values.

I continued the investigation with XeLaTeX and the Latin Modern fonts. I used fontspec to load the fonts “manually” with \fontspec{fontname} where fontname is given in the first column of the table. [See note in Conclusions regarding fontspec.] This uses the system wide (non TeX specific) catalogue, via the fontconfig library, to locate and load the fonts. In this particular case it loads Type1 fonts (.pfb-files) that just happen to live in my main texmf tree. 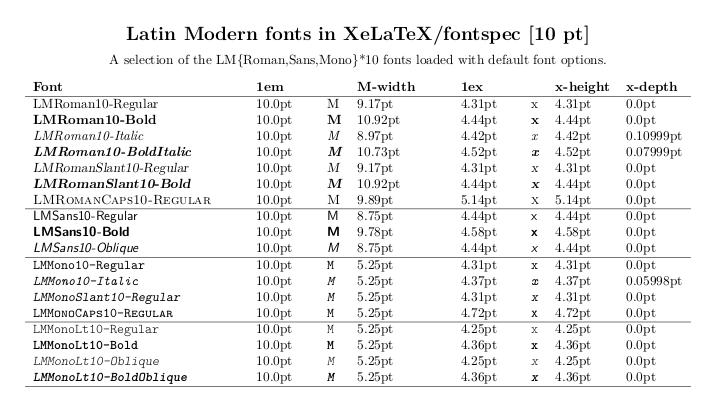 For good measures, I also compiled a table for some other fonts. These are all TrueType and OpenType fonts.

[Edit: after adding the section on Latin Modern in pdfLaTeX, I have reconsidered some of the conclusions.]

Note: I realize that this probably has nothing to do with fontspec, per se. It is more the question of “old” vs. “new” font handling mechanisms in the engine. However I use the phrase XeLaTeX/fontspec to differentiate the new font handling from the TFM font handling still present in the XeTeX engine.

From the collected data I conclude that, for non-TFM fonts:

Regarding different font sizes, I have done some runs for 12 pt text, and found nothing surprising. Just remembering that the Computer Modern fonts have optical sizes so 1em and 1ex will (probably) depend on the font size in a non-simple way.

To fill in a couple of gaps that Will didn't address: English-speaking typographers will specify the measure (\textwidth) in pc and the leading (\baselineskip) in pt; continental European typographers will use cc and dd for the same purposes (not that you'll see much difference).

There's no particular reason for preferring these units other than tradition.

Not the answer you're looking for? Browse other questions tagged best-practices unit-of-measure or ask your own question.

263
What are the various units (ex, em, in, pt, bp, dd, pc) expressed in mm?
79
What are the possible dimensions / sizes / units LaTeX understands?
60
How do you make your own symbol when Detexify fails?
61
How to find the \textwidth in two-column mode?
41
How can I force a \hspace at the beginning of a line?
77
Vertical Spacing within align environment accounting for fractions
36
What is the local height of a capital letter?
19
How do I convert pt/in/cm/mm to em/ex as they are defined at a given point in the document?
29
Where do the values of 1em and 1ex come from?
22
Is there an `ex` unit equivalent for the capital 'X' in LaTeX
See more linked questions

135
When should one use \begingroup instead of \bgroup?
9
Which unit of measurement for textwidth?
29
Where do the values of 1em and 1ex come from?
61
Which command should I use for textual subscripts in math mode?
10
Which one should be used: `newcommand` or `sbox`
2
The shortcuts for measurement units: cm and dm
3
Illegal unit of measure px when clipping in xelatex (but not pdflatex)
2
Use relative units in the preamble
0
Line spacing broken (bottom line falls below the frame or even empty) possibly because of the unit of measure of \vspace and images