What does \smash do, and where is it documented?

I see several users in this forum talk about \smash. It is apparently defined in base TeX.

What does \smash do?

For future reference, is there online documentation where I could find this?

As the name implies, \smash takes its contents and prints it as if its height and depth were zero.

The definition in LaTeX is carried over from the one in plain TeX, with a slight difference; I'll use the LaTeX one for ease of reference. The following refers to LaTeX 2018-12-01.

The macro distinguish if it is called in math mode or not. Note that, for efficiency, it doesn't read its argument at the outset. I'll assume the call is \smash{abq}. In math mode we get

and we now need to look at \mathsm@sh:

According to the working of \mathpalette, we get the equivalent of

If the call is in text mode, we have \makesm@sh{abq}. Now

In both cases TeX has set the contents of box 0; now \finsm@sh does its job

This sets the height and depth of box 0 to 0pt and typesets the box after initiating horizontal mode.

When you load amsmath the definition is basically the same, with the difference that an optional argument is allowed, which can be either t or b. With t the last operation becomes only

so the depth is preserved; conversely, with b LaTeX only does

and the height is preserved. This is accomplished by the redefinition (referring to amsmath.sty release 2018-12-01)

You see that \finsm@sh is redefined each time to consist of the necessary bits.

The conditional definition of \smash in amsmath.sty is due to the fact that \leavevmode@ifvmode has been added to LaTeX starting from version 2018-12-01 to initiate horizontal mode if found in vertical mode. In prior version of LaTeX this didn't happen, reflecting the same behavior as in plain TeX, where the definition is the same as in the LaTeX kernel, but without \leavevmode@ifvmode, which is defined in the LaTeX kernel by

\smash is a macro defined as

and \mathsm@sh is defined as:

and finsm@sh is defined as

A simpler version of the command which makes what it does a bit more obvious is this one from TeX by Topic:

which basically takes some content and puts it into a box of 0 height and 0 depth.

It's documented in the TeXbook and also in TeX by Topic, which is included as part of the TeX Live documentation (texdoc texbytopic should bring it up.)

The actual macros in the LaTeX kernel can be found in the document source2e.pdf (also available through texdoc.)

Some packages such as amsmath redefine it. See also

This answer attempts to address @BenCrowell's desire for examples of how smash can affect the output. As comments have indicated, it is height and depth, not width, that is affected by \smash. What this affects, therefore, is the vertical space allotted for the text, which could affect vertical placement of pre- and suc-ceding lines, the positions of super and supscripts (associated with the smashed material), as well as material stacked in conjunction with \smashed text. 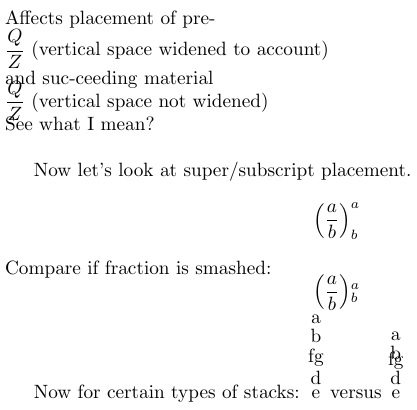 Not the answer you're looking for? Browse other questions tagged math-mode vertical-alignment or ask your own question.

38
The mysteries of \mathpalette
26
using underbrace without having left( and right) scale
17
Which package defines \smash?
5
How to prevent an underbrace, with a subscript, from affecting the sizes of delimiters
4
How to vertically align subscripts in mathmode
3
Add text to document without changing formatting or spacing
1
Put braces in itemize list
2
How can I adjust the baseline alignment of the tensor package?

12
Where do I find character codes to make my own "big symbols"?
12
Does the intlimits option work in amsmath package?
4
What does `\mathrel{}` do (with the empty parameter group)?
6
Libertinus and \mathcal
5
What happened to mathmode documentation?
5
How does \smashoperator clip the space of limit scripts?