I am using the listings package to represent verbatim font with breaklines set to true so that line breaks are produced automatically. I have set \emergencystretch to an abnormally large value since it seems the best way to produce (relatively) good looking text without manually editing the formatting all over the place.

However, when the line is broken immediately after a \lstinline (shorthand form of = used in the example below), a space is placed at the start of the following line. How to I remove this space automatically?

Produces: (check the space between "quick" and "will" - end of first line, second paragraph. 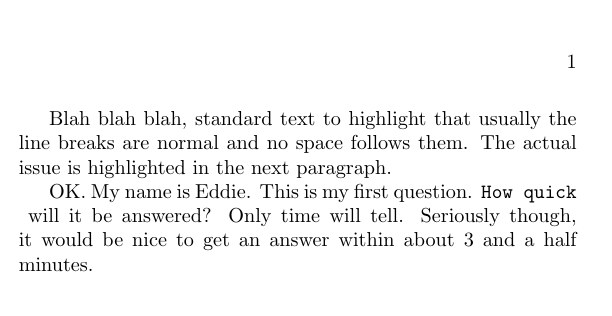 My initial thought was to specify \lstset{...postbreak=\ignorespaces} but this doesn't work since the linebreak occurs after the \lstinline.

Perhaps it is possible to use a \ifthenelse statement but it would require me to have a switch which lets me know if a linebreak is produced following a \lstinline command (could be hassle since this will only be determined after typesetting).

Any ideas would be massively appreciated.

listings has problems if the end of a breakable inline listing is at the end of the line. See e.g. also listings package introduces unnecessary linebreaks.

But none will imho handle every case, so you will have to check visually if everything is okay.

but I'm missing something at present I don't see why the space isn't dropped if for example you use \linebreak[0] I may add to this answer later. It's not related to the short = processing, you get the same from \lstinline|How quick|

Ah listings is adding a break point at the end of the text (which explains the behaviour at least) if you know that you don't want that inline listing ti break you could use \leavevmode\hbox{=How quick#} rather than using the \linebreak as above but if you do want to allow it to break but not at the end, it seems some re-arrangement of the listings internals would be required.

I suggest using minted instead (requires to run LaTeX with the -shell-escape option and to install pygmentize):

Not the answer you're looking for? Browse other questions tagged spacing listings line-breaking or ask your own question.

6
avoid linebreak in \lstinline if possible
11
Avoid line breaks after \lstinline
3
Linebreak after \lstinputlisting
13
wrapping inline long lines and adding background color
14
Breakable period
7
linebreak with \lstinline
0
Excessive space in lstinline after using Reactivatenumber
1
lstinline gobbles space with linebreak
4
lstnewenvironment/lstset : using colors conditionally emph/emphstyle - SAS: (in=_x) versus if x in (1,2)
3
Insert text except whenever it will be placed at the end of a line