Say I have a bunch of nodes I've already created in TikZ---maybe v0, v1, ..., vn-1. I'd like to connect certain of these nodes in a systematic way, by doing arithmetic on the indices, ideally mod n. For example, something like

\foreach \i \in {0,1,...,n-1} {\draw[->] (v\i) -- (v\{i+2})} But that doesn't work, and I can't seem to figure out the right syntax. And when I try to do complicated things with \pgfmathmod to do do the modular arithmetic on the node names, instead of the arrows connecting nicely between the nodes, I get the arrow connecting across the node to an inappropriate edge.

Any suggestions? This seems like a rather obvious thing to want to be able to do.

The let command is useful here and allows for "inline computation": 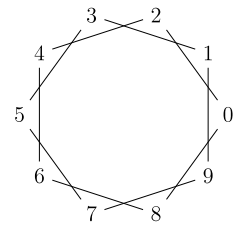 If int is not working, it may be because you need to upgrade your packages.

However, a solution that does not require int is to use the \pgfmathtruncatemacro macro. For example,

You can use the \pgfmathparse macro to do this. It's documented in the (amazing) TikZ and PGF manual, in Part VII, but all you need to know right now is this: \pgfmathparse{...} evaluates the mathematical expression that is ... and stores the result in \pgfmathresult. The ... should look something like 3 + 4 * 5 - sin(6). I don't know that there's a better syntax for this, but if you use it to effectively declare variable up front (e.g., \pgfmathparse{...}\let\j\pgfmathresult), it's not bad.

Before I get to sample code, two other remarks. First, the reason the second case fails is that, as far as I understand, you can only use the ... in the one-variable case. Secondly, the first case—with \{i+2}—is sufficiently wrong that I feel it's worth pointing it out. On the one hand, \i is is a macro which expands to some value: first 0, then 1, and so on. On the other hand, i is a character which, when typeset, produces "i". There is no connection between the two. Thus, when you write \{i+2}, you're looking at five tokens: \{, i, +, 2, and }. The first one represents {, the second three represent themselves, and the last one will try to end the group after \foreach.

Anyway, using \pgfmathparse, we can get something like this:

The first \foreach writes out the nodes in polar coordinates (which are (angle:radius)); the second one connects them as you desired.

I suspect that the problem actually lies with the ... bit in the \foreach list definition. I guess it's a bit tricky to work out how to fill in the dots on a double list. One could argue that this case is simple enough that it ought to "just work", but I guess that it would very quickly get complicated.

Anyway, why is perhaps less important than how to achieve the same result. I've been doing something a bit like this myself recently and here's how I did it: 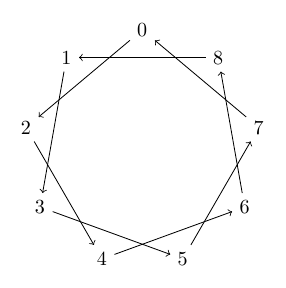 One important point: I found that \pgfmathsetmacro{\j}{int(Mod(\i + 2, 9))} would set \j to, say, 1.0 which wasn't what was wanted. However, using int meant that \pgfmathresult correctly stored the integer so a simple \edef\j{\pgfmathresult} stored that (the int is to convert the result of Mod - a decimal - to an integer).

Another option could be translating arithmetic to foreach header with evaluate option: 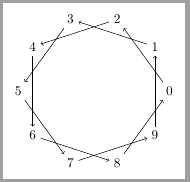 This question has some great answers and I realize that my contribution is redundant, but I was looking for a way to make a modular arithmetic wheel and didn't find it right away, so I put together the wheel below based on related contributions found here and there. I'm posting here because the OP has "modular arithmetic" in the title.

The command \wheel{<modulus>}{<layers>} takes two arguments: the modulus and the number of layers of numbers to show on the wheel. 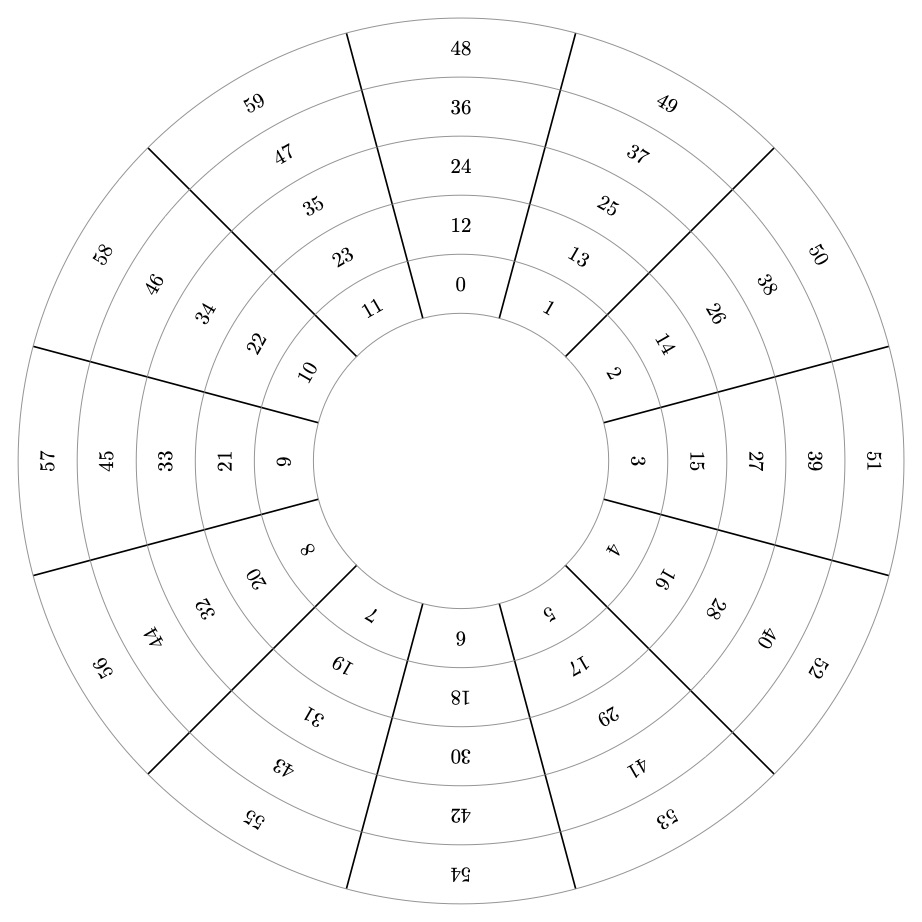 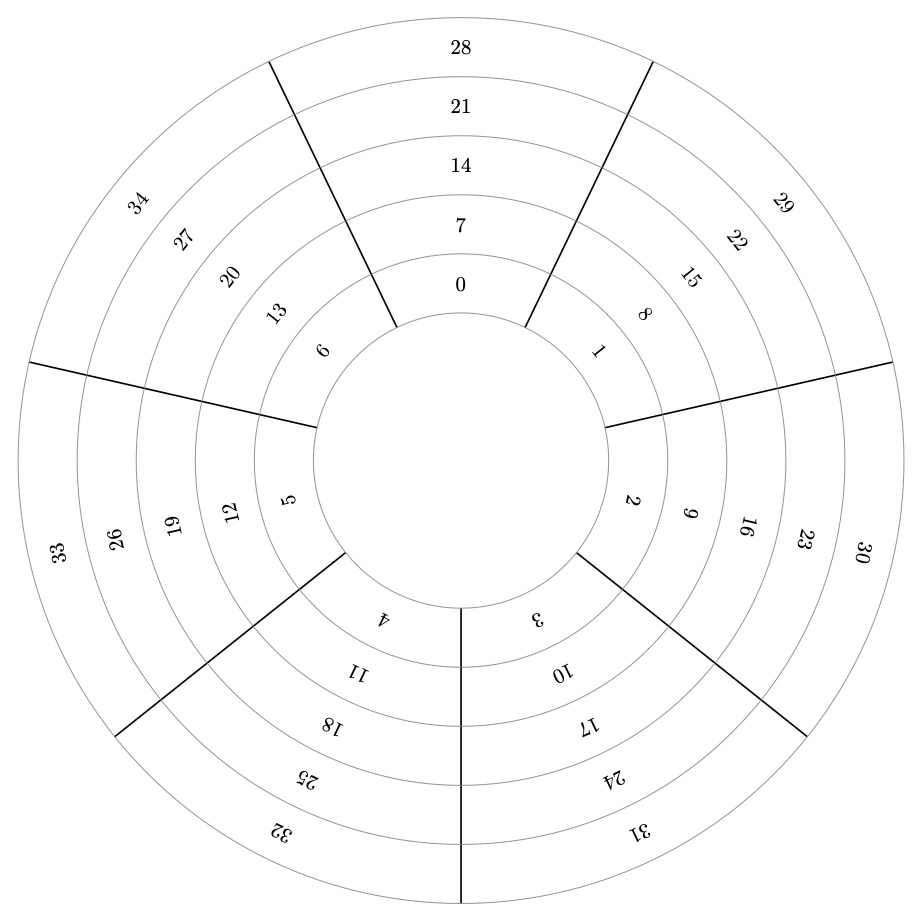 29
A circular table? (where the rows form concentric circles)
7
How to draw a Caesar Cipher diagram with tikz?
8
Chords between nodes on a clock-like diagram using TikZ
11
TikZ: Variable arithmetic result in node name
10
Is it possible to use a macro to name a TikZ node?
2
TikZ: Coordinate calculations inside newcommand
1
Dimension too large for TikZ modulo arithmetic

13
node names and nested loops in TikZ
54
TikZ: Using Loop to Draw Grid of Nodes
2
TikZ edge between multiple source nodes and single target node
4
Remove node name from tikz style
2
tikz: how to place a node aligned with two other nodes?
4
How to place nodes in an absolute coordinate system in tikz
0
How to correctly connect nodes in tabular
5
Iteratively draw and connect nodes via `\foreach`
3
Trouble using a predefined constant in tikz partway calculations
1
How to make tikz mindmap that where the second node and the first node are connnected horizontally, not vertically