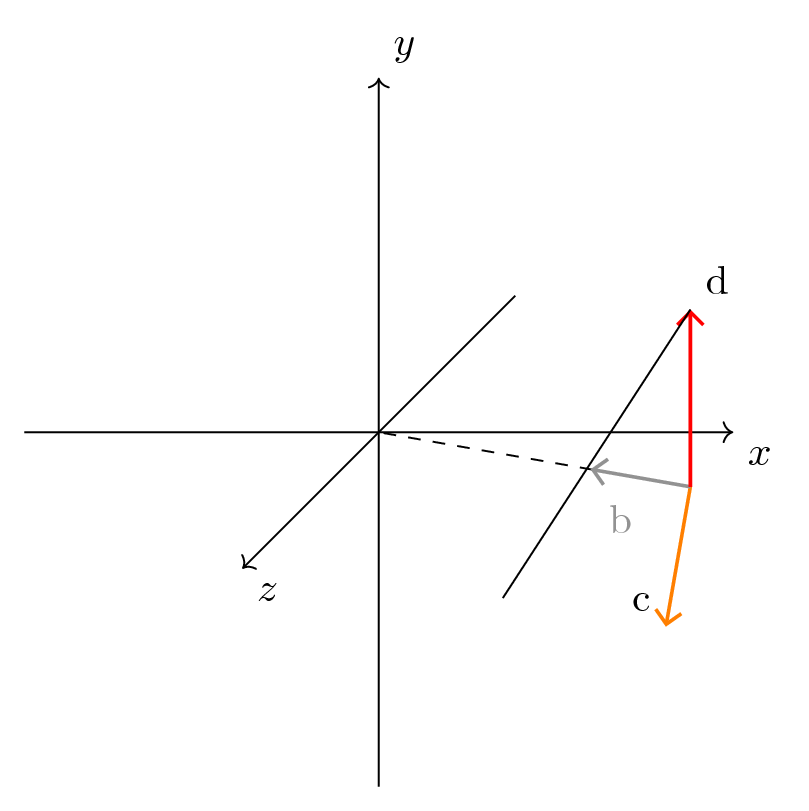 As noticed in the comments, the above code does not use tikz-3dplot. If, however, this package can provide a solution besides the traditional TikZ-only approach, it is ok and it can be used here.

It is asked to depict a triad of mutually orthogonal vectors. One of them (b, in the image above) is in the (x,z) plane in a general position and points to the origin; the plane generated by the vectors c and d should be highlighted. This triad should be depicted in a 3D space, and I should be able to arbitrarily rotate the space orientation. The end configuration of the axes should be the one shown in this answer, with the z axis pointing right.

All this summary wasn't written at the beginning because it was difficult, if not impossible, for me to work and make all the attempts on this picture directly. I was not able to provide any example or failed attempts regarding the general picture. The question would have certainly disapproved and criticized (as it was the 1st question).

The 2nd question was actually ambiguous, because I didn't notice the 45° line. Given that, I always tried to provide quick and precise questions, after making some attempts.

Thanks to all those who try to work on these images. I hope that this meets as much as possible the clarification that has been asked in the comments.

Not a real answer, but perhaps the first step. If you load the library 3d, you can specify the plane in which you want to work. Here is an example. 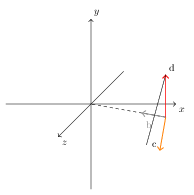 As you see, the syntax is rather self-explanatory. I am however struggling to understand what you precisely want since, as pointed out by @Kpym, your instructions are somewhat ambiguous. Yet I do hope that this example will help you achieve what you want.

Notice also that I spent some time translating your code to tikz-3dplot, but did not find an elegant way to do that. Obstacles include the fact that tikz-3dplot doesn't make it too straightforward to make the y-axis point up, it is using Euler angles, which makes it hard to do a rotation about the x-axis, and that there is a reflection required to make the axes match. These are not conceptual problems, but I was not able to produce something elegant either.

54
How can I draw an arc from point A -> B on a 3D sphere in TikZ?
4
TikZ, draw a 3D intersection of planes
2
TikZ-3dplot and rotation of coordinates
4
TikZ, drawing rectangle in 3D space
2
TikZ, node and expression do not coincide
2
TikZ (3D) changing behaviour with or without nodes

5
How to draw straight lines between nodes in commutative diagram without using TikZ matrix library?
21
Why isn't the arc drawn on the good plane using tikz-3dplot in Tait-Bryan convention
10
Is it possible to draw a 3d cylinder using TikZ-3dplot?
5
Best way to do 3d transluscent planes
1
Tikz: draw a vertical line to a straight line
4
Using tikz Calc package to add cordinates
4
TikZ, drawing rectangle in 3D space
3
TikZ, place cylinder in 3D space
6
best way to draw planes in 2d?
3
Tikz: How to rotate 3D objects on a single plane?