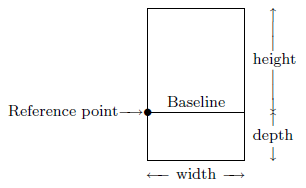 With \lower3pt\box1, the original reference point is moved down 3pt; the box will have height 0pt, depth 4pt and width 1pt.

The vertical position of the reference points is thus clear.

The space to fill is 3pt and we are given

The computed natural width is 0pt, so less than the stated width to fill up. The total amount of stretching is 4fil, so the stretch ratio is computed to be 0.75 (for fil). But the -3pt of natural width is still considered.

Then comes the second glue, with its -3pt plus 3fil, which is turned into glue

If you do \showbox3, where \box1 and \box2 are empty boxes manually set to the required dimensions, you get

Not the answer you're looking for? Browse other questions tagged boxes glue or ask your own question.

3
Vertical alignment of a \framebox
3
Boxes and glue: hand-setting letter header
0
A box's reference point
3
How to glue center environment to the text?
20
can glue be colored?
4
Can you replace glue with a box, after it's been set?
3
How is glue calculated?
1
character box depth and height
5
Question about exercise 17.16 in TeXbook
1
Justify box at the left margin while keeping \parindent glue/obeying \noindent if present