I am installing TexLive 2018 in MacOS and after running install-tl on Terminal I chose scheme-custom and then started choosing the installation collections. The options "Essential programs and files" and "LaTeX fundamental packages" were already selected, but the option "US and UK English" was not. Actually, none of the languages were selected. I thought texlive always installs the "US and UK English" package by default.

What happens if I don't choose any language when installing texlive? Will I be able to write anything with TeX/LaTeX at all?

The basic installation of LaTeX contains language definitions for American English, i.e., hyphenation patterns and localizations like date formats and the names of special sections such as Table of Contents or References. These definitions are used as a default, i.e., when no language-related packages are loaded in a document.

If you want (proper) hyphenation and localization for other languages, then the babel package can be used, which supports around 200 languages.

In the package repository CTAN, Babel is organized in subpackages for the different languages, such as babel-french or babel-german (note that these are somewhat unusual packages because they are not loaded with \usepackage{babel-somelanguage}, but instead they provide package options for babel, e.g., \usepackage[french]{babel}).

There is also a subpackage babel-english, which might seem strange because LaTeX already contains language definitions for English. However, the package is still useful for two reasons: 1. it provides definitions for varieties of English other than American English, and 2. it standardizes the way languages are handled (i.e., English is no longer a special case).

The MWE below shows some differences for the language varieties british and american. For these varieties (called dialects in Babel) separate hyphenation rules are provided, as a long list of character sequence patterns with hyphenation positions and a very small list of full word exceptions to the patterns. In the example, obligatory is in the American exceptions list but not in the British list, while the other words are based on patterns that are different between the two variants. For more information on the patterns, see How are hyphenation patterns written?.

Additionally, the definition of \today is localized, and some macros are provided for sections and references which are not defined without loading babel. These macros are the same for all English dialects (and therefore also the same as the default values) and normally you don't use them directly in your document, but other packages for formatting titles etc. can use these macros for localization. 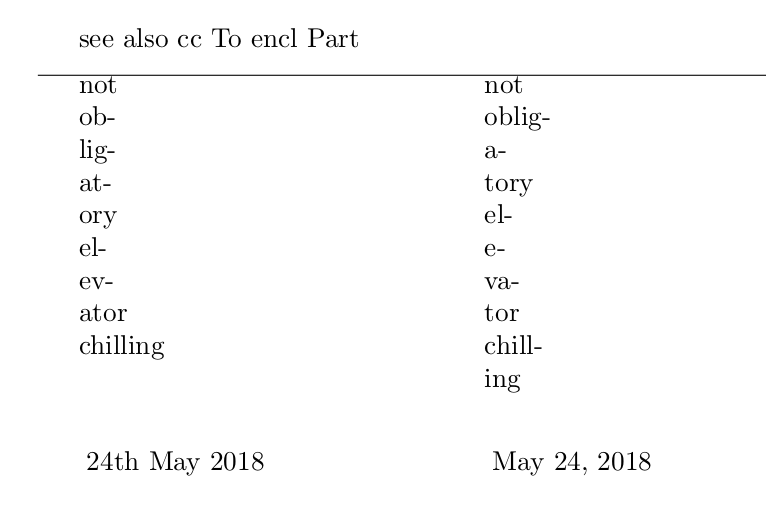 Not the answer you're looking for? Browse other questions tagged languages texlive-2018 or ask your own question.

15
How are hyphenation patterns written?