Removing a `tikzpicture` from a `\caption` in LyX

New info at the bottom!

I'm new to LyX and TeX in general, so this might be a very easy problem.

I had made a TikZ image as a figure in my document, and it worked fine. I wanted to add a caption, and learned that you have to put it in a float to do that, so I moved it into a float (I'm not completely sure what a float is, but I don't think that matters here; I put the TeX code inside a TeX code block inside a figure float). Suddenly, it doesn't work at all.

Trying to render a preview makes it say "The external program pdflatex finished with an error." I looked at the log, as it suggested, which says "! Incomplete \iffalse; all text was ignored after line 68." I opened the file in notepad++ and looked at line 68; here's the neighborhood of it:

I then tried ctrl-f for "iffalse" and got no results. I also tried a search for "if", and only found the words "different" and "specifications" used in my document body, as well as line 55 "\justification true"--so there isn't even an if statement anywhere in this thing to cause that error!

Apologies if this has already been asked. It seems there are a lot of "incomplete \iffalse" questions on here, but I don't know enough about TeX to know what applies to my situation; they all seem to say "incomplete \iffalse with \somefunctionidon'trecognise" and I'm not sure if any of these apply.

So, at the advice of user Torbjørn T., I looked at the code in the TeX preview panel in LyX itself (which I hadn't used before because it doesn't show line numbers; I hadn't realized it didn't just display the .lyx file) and found that the TikZ code had found its way into a caption block, so the full figure code reads

I cannot edit this in the TeX preview panel, and I'm not sure how to extricate the tikzpicture block from the \caption in LyX. Could someone explain how to do this?

When one adds a figure float in LyX, one gets this:

Here, the outer frame (inset) represents the figure environment in LaTeX, so that is the float. The inner frame, right of "Figure 1:", where the cursor is placed, is a caption inset. The caption text goes in this inner inset.

So when you're about to add the image, tikzpicture, or whatever it is, to the figure, you should move the cursor outside the caption inset first. E.g. like this: 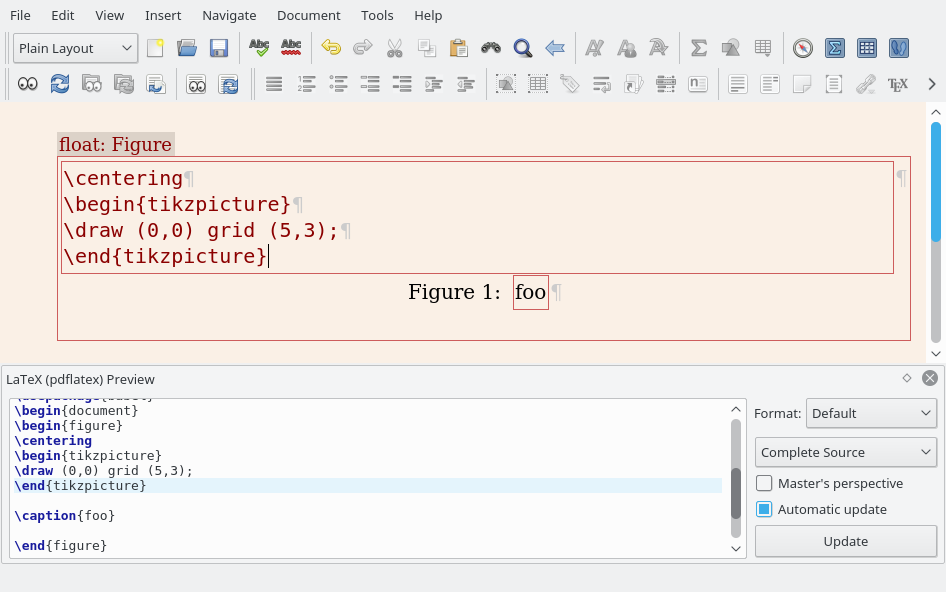 As for what a float is: The purpose of a float is to improve the page breaks in your document. If a figure is static, and it is just too large to fit on the current page, you'll end up with a page that is far from full. With floating environments, LaTeX can move big non-breakable things (like images) around, so instead of a half empty page, you get a page full of text, and the figure on the next page.

This is something that confuses a lot of new LaTeX users, leading to many questions about "my figure isn't where I put it". But there is, as mentioned, a purpose to it.

It is possible to turn off the floating mechanism for figures, by going to the settings for the figure inset (right click where it says float: Figure) and choosing Here definitely. There are other options as well, if you want to learn more about how influence float positioning, there is a very comprehensive answer in How to influence the position of float environments like figure and table in LaTeX?

Not the answer you're looking for? Browse other questions tagged errors pdftex lyx or ask your own question.

635
How to influence the position of float environments like figure and table in LaTeX?