How to automatically create a short caption for the list of figures?

I'm writing my thesis using figures drawn with tikzDevice, which I include with the following function:

I now want to get short versions for the list of figures, which would simply be the first sentence of the whole caption. I could rewrite the function using an additional argument in the function above:

However this would be a lot of adjustment given the number of figures. Is there a simple option to just split the argument 3 at the first dot inside the function?

Here I use listofitems to parse the caption at the first occurrence of a dot . and provide that as the optional argument to \caption. 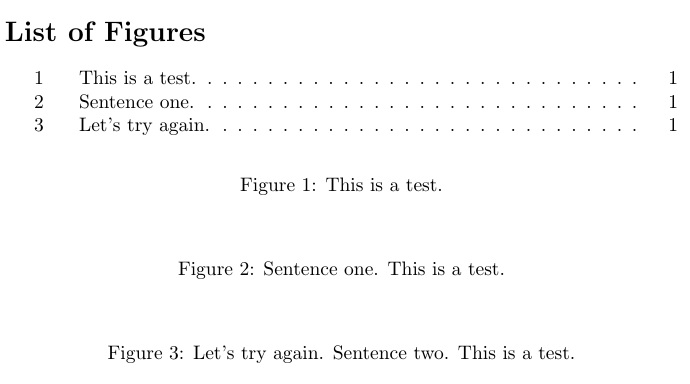 I tried with xparse partially successful (if somebody could correct my attempt). The solution linked by @naphanael is far better and simpler… and it works :)

Not the answer you're looking for? Browse other questions tagged table-of-contents captions or ask your own question.

6
Creating a second caption for a figure that won't appear in the figure's list index and is aligned with the first
7
Allow \listoffigures captions to break across pages
6
list of figures and tables when there are no figures or tables?
0
Split caption based on a height?
1
List of Figures + Beamer? (followup)
0
Sync short caption (for a figure list) with part of the long caption
0
Lower caption for beside caption with floatrow package
1
How to center a caption beneath a figure when using wrapfig in a two column (multicol) configuration