Glossaries - expand acronyms for first-time use within each chapter

I am not sure if this is acceptable typographic convention - but my PhD advisor would like me to expand each acronym for its first use within each chapter of my PhD thesis.

The rationale is that, if the reader (maybe an expert) chooses to skip over the introduction (where a particular acronym was first used) and goes straight to a middle chapter, then it is quite helpful to expand the first use of acronyms in each chapter to be expanded.

How do I achieve this behavior in LaTeX using the glossaries-extra package?

Here is a minimal example demonstrating the scenario. The desired behavior is also explained and highlighted in the resulting output. 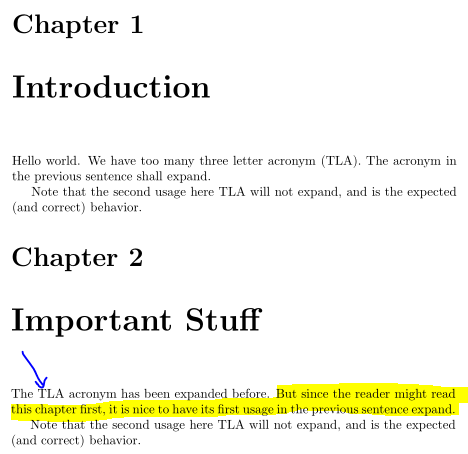 The simplest method is to insert \glsresetall at the start of each chapter. Since etoolbox is automatically loaded (by the base glossaries package), you can use etoolbox's \preto command:

If you use a different class (such as memoir or scrbook) there may be a convenient hook provided that can be used instead. If you want to limit the reset to just a particular glossary type, you can use the optional argument of \glsresetall.

Not the answer you're looking for? Browse other questions tagged glossaries acronyms glossaries-extra or ask your own question.