I have a simple question, but I'm having trouble figuring it out. I'm trying to make the limits on a sum in math-mode appear as they do on the right hand side below. 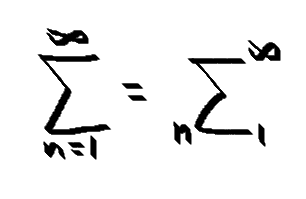 I know that in-line displays the limits like on the right hand side by default, but writing \textstyle before the sum in math mode of course makes the sum symbol smaller, much unlike the equations around it.

I did find a way to take the index variable out from underneath and put it near the bottom left. I have so far 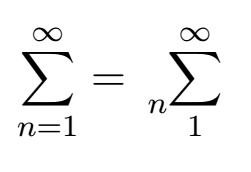 Now the limits just have to move beside the sum and be brought slightly closer together. I thought of using \sum\ _1^\infty, which might technically work if the height of the blank vertical was higher (How could you make it higher as an aside?)(I'm new to LaTeX), but perhaps it would not look as nice as other ways that exist.

How could the limits on the sum be brought from where they are in math-mode to where they would be with in-line, but preserving the size of the sum symbol as it is in math-mode?

Can you increase the height of the blank vertical, \ (with a space after the backslash)?

Add the left subscript as the subscript of a phantom sum. Some spacing needs to be fixed, though:

It's true that the standard notation for summation is a bit ambiguous, because it doesn't explicitly mark the dummy variable, but context is usually helpful. I don't find this notation particularly appealing.

Not the answer you're looking for? Browse other questions tagged math-mode equations or ask your own question.

14
Define strange operators
179
Show inline math as if it were display math (and vice versa)
12
Getting superscripts in math mode without the ^ character
2
Characters as accents in math mode with glossaries package
3
How to resize \Sum and \Prod commands
3
Debugging - spacing in math mode
5
How to shift the sum limits?
2
Alternative to using inline math mode for single letters?