I am trying to write a few properties of Young diagrams using Latex and am trying to make the symbolic notation as clear as possible but I encountered a few problems.

I would like to study functions whose arguments are Young diagrams, for example long vertical or horizontal strips. I would like to draw a vertical strip by drawing 2-3 blocks at the top, followed by vertical dots and finishing with a single block at the bottom, all in a brace to the left (or right) saying that there are k blocks. I tried using the \young environment but it doesn't seem to let me skip vertical strips or draw empty blocks. the ytableau environment does, but I don't know how to insert the dots in the place of the skipped blocks. Also, when considering a function of two arguments, the ytableau environment kinda messes up the centering and gives the top block as the center of the line, which doesn't look good... Also, in the later stages I plan to distinguish between the first few blocks and so would like to put into a brace only a few of the first (or the last) blocks.

To give it a more visual explanation, this is something I would like

and the best I got so far is this

I would really appreciate all the help and suggestions.

You can “vcenter” the tableau by nesting it in gathered: 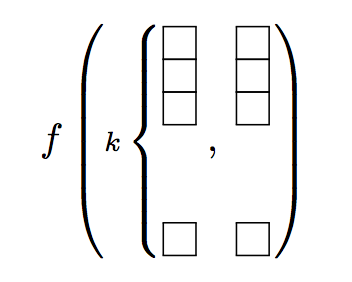 For the dots, use the optional argument, I provide two different versions: 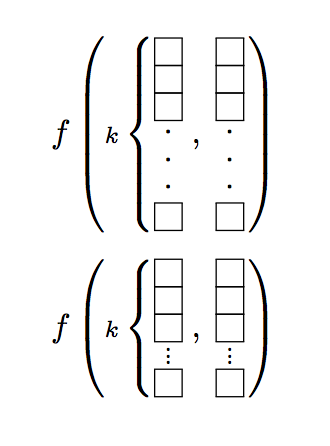 On page 1 of the manual it says that one should use the centertaleaux option to center the tableaux. I'd agree, however, with @egreg that his \none[\svdots] trick looks somewhat better. 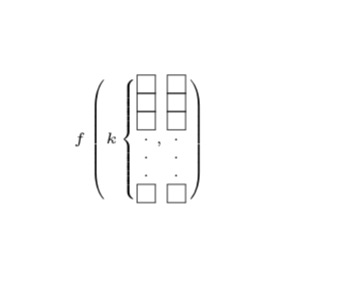 Not the answer you're looking for? Browse other questions tagged diagrams ytableau or ask your own question.

3
Layered diagram with empty spaces
2
Staircase paths through young tableaux
12
Drawing rectilinear curves in Tikz, aka an Etch-a-Sketch drawing
9
Line up nested tikz enviroments or how to get rid of them
5
Curly braces in Hasse diagram
3
How can I draw these Young tableaux type diagrams?
2
Young tableau and Young tabloid together
2
Customize a layered block diagram
2
Young tableaux and braces