How can I force TikZ pin angle?

I'm trying to draw a resultant force diagram like so:

But my pin refuses to have an angle of 270 (?) relative to the 5kg weight, and appears slanted to the side. How can I force it to have an angle perpendicular to the slope? I think it's colliding with the bottom of the triangle, as 280 degrees snaps it across to the other side.

This is how it appears now: 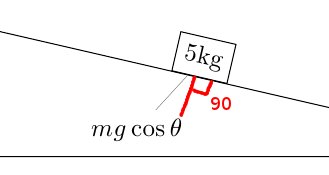 What can I do to get it behave?

this is what I went with eventually, using Jake's answer, with extra pins.

To disable the snapping of the pin node, you can redefine the following internal macro (taken from https://tex.stackexchange.com/a/85669/2552):

If you don't want to redefine the macro, you could construct a pin that honours the angle using a combination of an empty pin and a label

To do this, you need an empty pin label with an inner sep of 0. Then the pin line ends up exactly where you want it. Since only having a pin line without a pin label would be a bit pointless, we can fake the label using a label in the options of the empty pin. So pin={[inner sep=0pt, label={[inner sep=0pt]270:$mg\cos(\theta)$}]270:{}} works beautifully in this case. You could wrap this into a style so it's easier to handle.

Edit: It turns out (from TikZ node pin angle in 2D plot) that the label part also has a snapping behaviour that can be undesirable. To place the label text properly in line with the pin line, a "normal" node with the correct anchor instead of a label node has to be used. Here's a new style, precise pin=<angle>:<label text> that will place a pin with the proper angle and correctly placed label text: 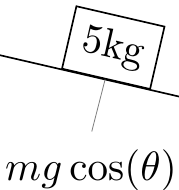 My investigations on this have led me to the following conclusion:

For precision positioning, don't use the label or pin options.

And for that reason, I'm heartily recommending wh1t3's solution.

Nonetheless, it can be illuminating to see why the code is being particularly stubborn (and it'll also show why there's the strange "skip" when you vary the angles, which baffled me for a long time). To understand what's happening, you have to understand what happens when you pass a pin option to a node.

Putting all of that together, we see why we get such strange behaviour. For example, change the angle from 86 to 87 results in the anchor of the label flipping from south west to south, whereupon the centre of the node jumps by about half the text width. This leads to the resulting line changing a lot.

Now, for vague "label this node at an angle of 60", this level of automation is what you want - these decisions are mostly right most of the time. But if you want precision engineering, they can get annoying.

Annoyingly, the manual suggests that the major problem (which is the choice of anchor for the label) can be overridden. However, my experiments have failed to produce a successful high-level way of doing this. I have, naturally, come up with an Extreme Hack which solves the problem. The fact that I had to resort to Extreme Hackery led me to my aforementioned conclusion.

What you want is to be able to specify the angle of the label and then have the resulting edge drawn with that angle in mind, not between the centres. There are two ways to accomplish this by subverting the above:

I prefer the second, but couldn't get it to work. So I present a solution based on the first. For this to work, we merely need to override TikZ's choice of anchor. The anchor is computed in a command called \tikz@auto@anchor and this is used to set a macro \tikz@anchor. So we temporarily disable \tikz@auto@anchor and explicitly set \tikz@anchor. A side effect of this is that the label isn't positioned as far away as it used to be so we need to increase the pin distance (because the label is now anchored at its centre instead of on the boundary).

And I remind you that although the code looks quite simple, it is Extreme Hackery and should be used only with Extreme Caution. Use wh1t3's solution in Real Life.

(NB I used Ryan Reich's trace-pgfkeys package from How do I debug pgfkeys? a bit in figuring out what was going on here. Very useful.)

This is not really a solution, as it does not use the pin option. I am not sure why the pin approach isn't working. For your current example you can use the following workaround using partway modifiers though.

As requested, some explanation on the subject of distance modifiers. These are explained in detail in the TikZ manual in section 13.5.4. Also have a look at the surrounding sections regarding partway and projection modifiers as they are equally useful. The general syntax for the distance modifiers we use here is
<coordinate a>!<dimension>!<angle>:<coordinate b>
Here the <angle> is optional. When the <angle> is omitted, the above evaluates to the point that is <dimension> away from a on the line from a to b. When an <angle> is used this point is also rotated by <angle> around a. To see what happens in our case,
First: We move 3ex from weight.south to weight.south west.
Second: We rotate this new point 90 degrees around weight.south

It should be noted that the direction of the line from a to b influences which way the rotation goes. That is, if we had used weight.south east in our example instead of weight.south west the line would have been directed upwards perpendicular to the slope.

Again, read the manual on these topics, it is very well written and these techniques are immensely usefull to construct points based on existing shapes.

Idea : I try to use a box with a null width but like Jake remarks the next code seems wrong 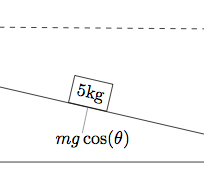 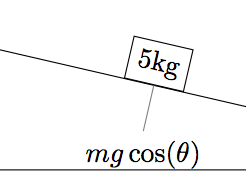 once calculated that angle, you do turn the vectors x and y 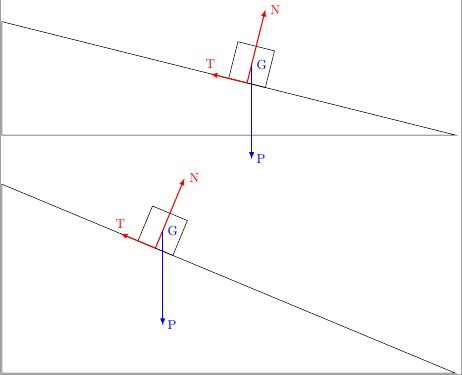 8
TikZ node pin angle in 2D plot
21
How to define the default vertical distance between nodes?
6
TikZ/ERD: node (=Entity) label on the inside
8
Tikz: setting options for pin
10
Tikz: adjusting pin anchor
4
How can I force the pin angle in a TikZ data visualization?
8
Tikz pin inherited line style
3
Document header with tikz
0
How to pin an ellipse with tikz?