Tikz - How to determine the coordinates in fill

How to create Candle Symbol in LaTeX

How to find the coordinates, it can not be shear hit and trial, there must be some reason behind it. its better to learn how to fish then ask ask for a fish :), so lets learn it from TeX Gurus. Really appreciate all your help.

While our gurus are busy with their extensive answers here is a quick stab:

There is an involved process to compute these curves and I don't think I can do justice with an answer that can fit here (although my work involves such interpolations pretty often). However I would like to quote the paragraph from the manual (p.25) which pretty much gives the basic idea.

For this, TikZ provides a special syntax. One or two control points are needed. The math behind them is not quite trivial, but here is the basic idea: Suppose you are at point x and the first control point is y. Then the curve will start going in the direction of y at x that is, the tangent of the curve at x will point toward y. Next, suppose the curve should end at z and the second support point is w. Then the curve will, indeed, end at z and the tangent of the curve at point z will go through w.

In our special and quite beautiful example, I have tried to show the locations and the tangents with dots and arrows to illustrate the choices. You can also use the show curve control option (PGF manual v2.10 p.327) as Jake commented to this answer. However to save space I did it manually below.

The remaining detail is the magnitude of the control point distance and that, roughly speaking, defines the emphasis of that control point. To see this please make control points further away but on the same direction and check how this affects the time spent going in that direction. I have added one such example to show the difference for the first control point for the left segment. 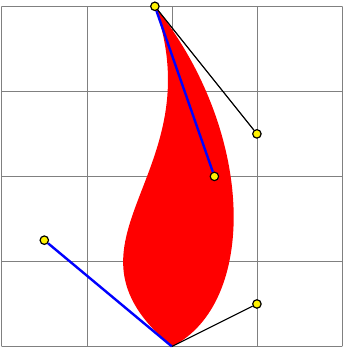 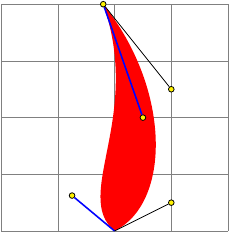 48
How to create Candle Symbol in LaTeX
10
Plotting a curve with given values and derivative values
11
Is it possible to have a Bézier curve with 3 control points in TikZ?