Using Notepad++ with MiKTeX on Windows

I'm using MiKTeX 2.9 on Windows. So far I've been using LeD to compile my PDFs (using pdflatex). I want to start using Notepad++ to compile my LaTeX PDFs as I've lately become very fond of this editor.

Would anyone be able to point me to a way to configure Notepad++ with shortcuts to compile bibtex and pdflatex?

I managed to find the perfect solution! For some reason, this didn't show up on my previous Google searches. I tailored my version of this solution: http://nimal.info/blog/2010/latex-on-windows-with-miktex-and-notepad/

My version (on a 64-bit Windows 7 machine) is as follows:

The BEST parts about this method are:

Thanks Nimal, Jonas, Bert and the others who contributed to this awesome solution!

I've stumbled through a bunch of different IDE's and honestly I think that notepad++ is one of the most underrated options available to anyone doing TeX stuff.

Along that line, I think that most of these other options, which I started with, are overly complicated when we have tools like arara and latexmk. They all work fabulously well, and I greatly appreciate the help they have given me, but I think we should use all the tools available to us. I personally love arara and I have my way that I now use every day that leans on arara more than notepad++.

This is my notepad++ set up in NppExec

No batch files necessary. In my documents, I usually use a variation on this set of rules.

The pdflatex,biber and clean are all included in arara. sumatrapdf is mine, but is exceedingly simple. arara also supplies a bibtex rule which is just as simple to call, but I prefer biber.

This way, from the source code you can change your compilation options on the fly, but your actual compilation can stay key-bound the same way.

This would be a comment, but for length. I contributed to the batch file above, but here's my latest version:

It's called with 3 parameters - directory, filename, and a third, which can be "noclean" to keep temp files, blank to clean up but not view pdf, and anything else to show the pdf. I map [shift]+F5 to view and clean, and [ctrl]+F5 to view without cleaning.

As there's currently no windows pdf viewer that doesn't lock the file on opening (my original reason for preferring foxit) the batch file renames the output pdf to put a date/time stamp in the file name before opening, allowing the next build to be opened without errors.

Another macro to call ASpell is handy as well.

As mr-komandez mentioned, there is also latexmk. It can completely automate the process for you. One of the coolest features of this package is the -pvc-switch, which provides a continuous mode. So every time you save a file in the workspace, latexmk will run the necessary toolchain to compile. It has a lot of options, but for bibtex/pdflatex you can do this (assuming you have the NppExec plugin set up):

NppExec Command (without -pvc switch) If you want more control over things like cleaning directories on some runs, use different engines (such as xelatex) or for some reason you do not like to have -pvc doing its thing. You can also setup NppExec with hotkeys and amend the above with anything specified in the latexmk manual, there are quite the repertoire of options and switches you can use. If you follow the steps above, remove the -pvc and make any changes you see fit, you can then use the saved commands in the following way: 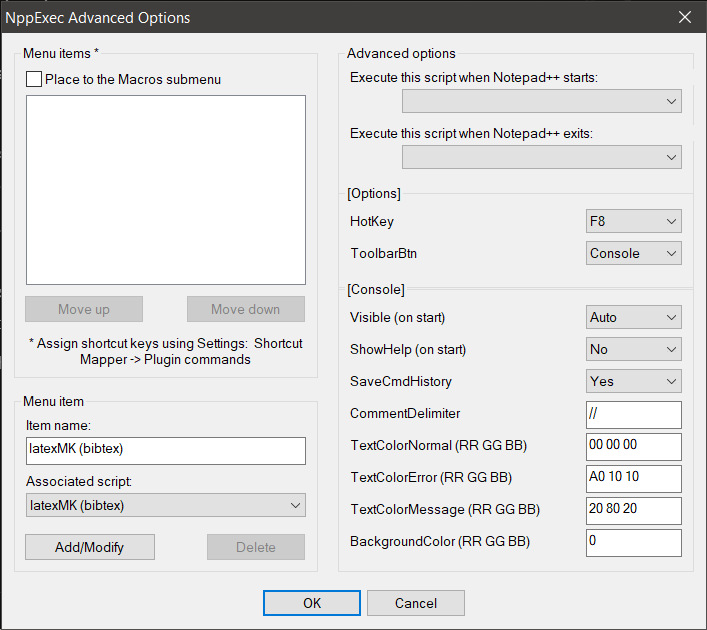 Since you are using MiKTeX, you can also use the -aux-dir= & -outdir=-switches, which will put all auxiliary files/compiled files in subfolders as specified.

Here is my contribution for configuring Notepad++ with NPP EXEC (v.7.9.2 -32bit) using just a part from @Mark Mendoza:

If you already installed arara and is working use

after compiling it will pop-up the .pdf. I'm using Sumatra PDF with Advanced Option: ReuseInstance = true

Not the answer you're looking for? Browse other questions tagged miktex windows editors or ask your own question.

902
LaTeX Editors/IDEs
10
Which editors can autocomplete any word from document?
7
Recommendation: tex editor, word and windows user.
5
Fatal error, "Can't write on file 'test.pdf'
4
Is there an editor with code block folding, one click dvi-ps-pdf compilation, etc?
5
How to navigate TeXnicCenter documents
6
work on documents on Linux and Windows (umlaut, newline)
3
How to use Notepad++ together with TeX Live to write LaTeX?
3
How can I have several (La)TeX distributions co-existing on the same computer and easily switch between them using one editor?
3
Using Biber with MiKTeX from command line
See more linked questions

10
MikTex Packages Download Failure
3
Pdflatex problem with Texstudio and Miktex 2.9
10
Configuration of Texmaker to work with MiKTeX Portable
7
Has anyone managed to use \glossaries with TeXstudio on Windows?
3
Trouble installing and using TeXmaker with windows 10
2
Notepad++ and MiKTeX -- CMD not recognizing commands/exes
1
Using Fira with Metropolis / Miktex Windows
1
What editor should I use for working both on Windows and MacOS?