Is there no easier way to float objects and set margins?

I come from a HTML / CSS background and am used to a particular way of setting margins, floats, etc. As a beginner in TeX, I am having a hard time positioning elements, probably because my mindset is still in CSS positioning and I do not yet grasp the TeX way. After struggling for two hours, I now more or less set up a letterhead that I soon want to set out as a background (which I just learned here). But I feel my code took way too long (I'm learning, but still) to write and not clean (I feel I'm using the wrong commands). So to get a better grasp on positioning, I would like to ask how I should get this done:

This is something I made in HTML and it is supposed to be the header of a letter (used a placeholder logo for this sample). From my standpoint, this is what I need to do:

After my struggle, this is the code I put together:

This is what I get:

Any other tips on better understanding floating and margins is appreciated, especially taking into consideration these kinds of 'designs' rather than articles and more standard text documents.

In All(TeX), like in html/css everything is a box. When Håkon Wium Lie developed CSS he based a lot of the CSS concepts on TeX (see Wium Lie's phd thesis).

So in order to follow what is happening with the code we will do two things; first put everything in its own box and secondly frame everything using a LaTeX \fbox. TeX provides two major types of boxes \hbox and \vbox. LaTeX provides many more such as \parbox, \minipage, \fbox etc.

First you will need to place the image:

The important thing to observe is that it is exactly the same concept used in html/css when you place an element in a div and that is why, you need to clear empty divs in html. In TeX we can get the same effect by using a \vbox of 0pt height. The floating to the right can be achieved using an \hfill. Depending on where you place the \hfill command the image can "float" left or right. Using \hfill\image commands\hfill will center it. But remember though that there is no such thing as a float, in (La)TeX.

If we modify the \vbox to 3.2cm, we can get the image to be as follows. This though will not be very useful, as we want to place the Company name and the slogan to start on "line 2".

At a general level you can think of \hbox and \vbox as being very similar to divs. Placing the Company name and slogan in similar boxes we can get the following.

We can move the elements vertically by using the TeX command \vskip which we set to zero in the above example. Setting it to a more suitable value, we get:

In the last example we set all the "padding" and "borders" to zero, by setting \fboxsep and \fboxrule to 0pt.

For code that you might encounter many times, is best to write macros rather than lump everything in long statements. This is good computer programming in general and follows the DRY Principle (do not repeat yourself).

Your suggestion that the code is longer than html/css/javascript is doubtful. I understand you coming from float:right, but you forgot all about having to clear divs etc and the pain the web went through with browser incompatibilities, starting from slicing everything and placing it in tables, and the almost impossible way to vertically center elements in html/css. When learning a new programming language you need to spend a bit of time to develop your own style and base knowledge.

And finally here is the MWE:

As a final remark, you do not need the wrapfig, color or the fullpage package to achieve what you want. The easiest way to set margins is with the geometry as you have done.

As explained in the other answers TeX has a model through which you can place boxes inside boxes and somehow get your positioning done. For general graphics this is not really very satisfactory, even though in practice you can do essentially everything with enough effort.

LaTeX added to this a picture environment in which you are able to position according to some underlying "grapical coordination system. Again this isn't really what one is looking for in your example as one has to calculate the coordinate positions somehow for each object in the graphic.

What you really want instead is to specify the relations between objects, eg the right-hand center of object A is aligned with the bottom left of object B offset by some space, etc.

So after having seen plain TeX and LaTeX kind of solutions let me offer you the LaTeX3 solution which is called "coffins": a coffin is a box with a large number of handles you can refer to and align with handles on other coffins. With this approach the solution to your problem could look like this:

This will lead to the following result:

A couple of notes here:

As a teaser I like to display a titlepage from a magazin by Tschichold from 1925 which I recreated using coffins for my talk about them at the TUG conference 2010.

I would be interested who would attempt to do that in the plain TeX box model approach: 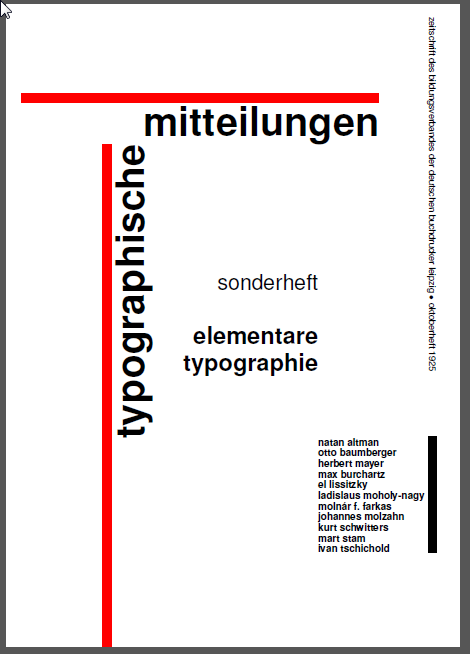 This was achieved with setting up 10 coffins and joining them together at the right handles, i.e., 10 join commands.

The following is a rather plain-TeX way of doing it. I've removed everything but the essentials.

I apologize for not doing it the "right" way in LaTeX; unfortunately, I am rather inept at using the LaTeX variants of plain TeX boxing and spacing constructs.

As for the logo being ragged: if it works at a higher resolution, I suspect it's just the limitations of your viewer's scaling. This happens a lot with graphics.

Edit: Maybe I should comment that your expectations of the word "float" are not quite how it is used in TeX. In particular, "float:right" is like \hfil(l)(l) (though it can get quite awful if you want to wrap text around it; hence wrapfig, as you no doubt discovered). A "float" in TeX is something that floats not only vertically, but also between pages. It's not really appropriate to use one for something like a letterhead, which has absolute positioning, but rather for a figure or table (like the LaTeX environments of the same names) that displays data that is referred to by the text but not necessarily synchronous with its flow.

And here a more LaTeX-like solution

You should be aware that centering things vertically is not a very well defined concept. Characters (and so also lines of text) have a height and a depth and they are not very symmetric. How e.g. would you vertically center a large A? To get an optical pleasing result it is often sensible to move a text manually away from a mathematical center point.

As others have pointed out, in TeX terminology, what you want to achieve is not a float. ConTeXt provides a combinations environment to place objects side-by-side. This is primarily meant for subfloats, but works well for this example as well.

The main idea is to set distance={1pt plus 1fill}. This allows the space between the two objects to expand until the total space is equal to \textwidth (set using width=\textwidth).

The location=middle key ensures that the logo text and the logo image are vertically centred. If you want the logo to be top aligned or bottom aligned, you can set location=top or location=bottom.

Internally, this is same as the plain-TeX solution that Ryan Reich gave; ConTeXt just provides a nice key-value driven wrapper around it.

Not the answer you're looking for? Browse other questions tagged positioning boxes or ask your own question.

182
Showcase of beautiful title page done in TeX
146
LaTeX3 versus pure Lua
62
Bringhurst chapter style in memoir
17
How to place an image at the right top of a document?
18
How do I put an image on the left of right-aligned text
25
LaTeX3 and pauper's coffins
19
Creating letters with zero-margin colored headers, in addition to the regular letterhead
8
Document layout, combining text and figure panels
0
Independently align element vertically and horizontally
0
coffin--structuring and typesetting
See more linked questions

17
How to place an image at the right top of a document?
1
How to include PDF absolute positioned and scaled?
4
mdframed box spanning over page break: prevent images in between
9
Is there a way to set a parbox to a minimum height?
11
How to understand LaTeX styling when coming from a CSS background?
1
How can I set margins and positions in my list environment