Want to improve this question? Update the question so it focuses on one problem only by editing this post.

I would like to dedicate my PhD thesis for the dear ones who unconditionally supported to see me through to the other side.

I intend to do the honours through the ancient keralite tradition of scribing on a Thaliyola with a Narayam. This practice is roughly equivalent to the western tradition of messengers in olden-day courts delivering announcements/invitations in a vellum parchment with the content scribed with a feather quill.

The only image I could find was from Wikimedia commons, 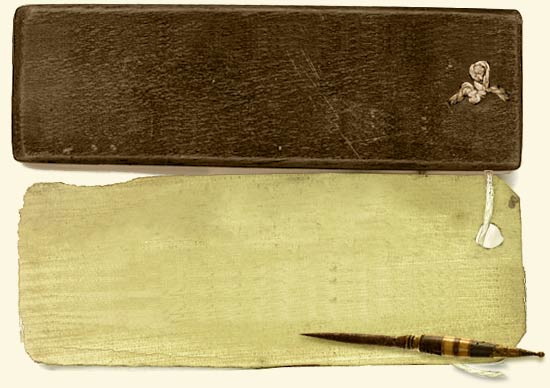 I would like to typeset something using Tikz or native latex for the parchment background (and obviously the text that will be scribed on) using xetex or luatex since overlaying text on this image seems suboptimal.

As a first thought, it sounds like the I could use a Tikz node with jagged edges (given in the tutorial sections of the tikz manual), some shadowing and use a wooden texture filling, but there could be some better alternatives out there for this naive thinking. For the Narayam, I might simply have to drop it, since it is a real-world solid rather than some typographically amenable shape.

May I seek help from the community towards achieving this? I am looking for some creative suggestions something along the lines of the answers to the Cthulhu worshipping mad-man question.

What I specifically need help with

The Chulthu question provides only a basic parchment background (with uniform edges) and does not provide clues to these specific questions.

575
How do I make my document look like it was written by a Cthulhu-worshipping madman?