I get this error message, during compiling my .tex-document.

I am writing my thesis right now and I am very confused about this error message, since it seems to be connected to a special character, which I do not use in my manuscript. The solution up to now was the reloading of an older version of my manuscript...after some hours of work and after several times of successful compiling this error suddenly occurs again. I don't get it why, since I just write some text, add some figures and nothing more...

any suggestions, how I can solve that issue? I have no idea, what kind of MWE I should post here :( where does this comment "line234" refer to. Line 234 is normal text in my manuscript...

If you copy/paste some source, it may happen that é had been coded as

which in Unicode aware environments is rendered as expected. Unfortunately pdflatex is not Unicode aware and cannot deal with combining characters, which are placed after the character they refer to.

The only method that gives correct results is to change the combination into the non composed character.

You're removing the error message, but the output is completely off.

Note Copying from the above will not show the precomposed characters, because either my OS or this site does normalization.

and look into the pdf which char produces this and delete/correct it.

I had a very similar problem:

It seems the problem was not in my main text but in my .bib file instead. I had a citation in the line in which my compilation said I had the mistake, and after checking this reference inside the .bib file, I found that it had several accented vowels in curly brackets. I changed the vowel in curly brackets by the corresponding "normal accented" vowel (I mean, with the vowel accented using my keyboard) and the problem went away.

As others have already said, the issue is the accented characters, likely in the .bib file. Replace the culprit characters there with the corresponding latex-appropriate e.g. \'{i}.

Either compile in LuaLaTeX/XeLaTeX, or normalize your source file to NFC form. PDFTeX chokes on combining characters, but your accented character most likely has a canonical precomposed form that inputenc can handle.

You might be able to do this with iconv -f utf8-mac -t utf8, or here is a little program I wrote that does it.

As a rough workaround, you can use this:

However, the workaround is indeed rather rough (look at the left R): 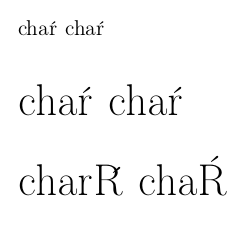 Compiling with XeTeX works for me, maybe because it works better with unicode.

Here a found some clarifications.

Not the answer you're looking for? Browse other questions tagged bibtex errors unicode input-encodings or ask your own question.