I am sure this has been answered already, but I cannot seem to find any answer that explains it in core TeX primitives and that I understand on a token level, e.g. I definitely don't want to get into expl3 before I got a grip on TeX itself.

What I am trying to do is basically just being able to write macros that can be used in a nested fashion using braces like \amacro{\bmacro{bla}}, first evaluating \bmacro{bla} to e.g. la (argument without first token = \@cdr) and then plugging that into \amacro, evaluating to l (only first token of argument = \@car).

Using \edef I try to ensure that the argument is fully expanded before I go and operate on it, but while the individual macro calls work fine, compilation fails with the nested way with

It's not that unexpected, since it kind of is a nested \edef on the same name so I could very well see it breaking that way, but I didn't really get around what \inaccessible means in this context and why it arises.

And then, of course, the main point, there must be a proper way to do this in TeX core primitives, right? There has to be some way of fully expanding an argument before doing something with it.

First of all, you're missing \expandafter:

otherwise \@car will just produce \temp and \@cdr nothing.

You cannot nest \bmacro in \amacro, because \edef is not expandable.

On the other hand, with LuaTeX there is \expanded (and it will be also in the other engines in a near future). 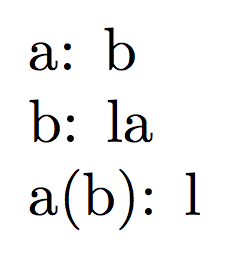 Basically, I’m posting this answer because it is way too long for a comment.

As usual, @egreg’s post already answers your question in essence. However, I think that you are having difficulties in understanding exactly what expansion means, and that you tend to confuse expansion with digestion (i.e., execution in the stomach), two concepts that are quite different from each other. This is absolutely excusable, since TeX’s behavior in this regard is really hard to understand, and the answer that David Carlisle has linked to is very helpful in explaining this subtle topic; nevertheless, I think that it could also be helpful to show you exactly what happens when your code is executed, in a step-by-step fashion. This is precisely what this answer does.

Then TeX processes \edef: this is an unexpandable token, so it is forwarded to the “stomach”, where it is executed. Since the tokens in the replacement text are all unexpandable (they are just character tokens), this means that \tempa is defined to expand into bla. Next, TeX finds \@car, which is defined as

This is again an expandable token, so it is expanded: the current definition of \tempa is bla, so

is what remains in the token stream after the expansion. These are all unexpandable tokens, so they are sent to the stomach, where they are executed. The final result is that TeX typesets “abc” (note that it was already in horizontal mode) and that a temporary definition has been made.

This is very similar to the previous case, hence I‘ll leave it “as an exercise” to you. The final result is that

is replaced by nothing, i.e., it is removed from the token stream, but always with the side effect of defining \tempa to expanda into bla.

This is, of course, the most interesting case. Initially, the token stream contains

According to the definition of \amacro, this is replaced with

Again, the next thing that TeX processes is \edef, which, I repeat, is not expandable and proceeds therefore to the stomach, where it is executed (not expanded!): \tempa is defined as a macro that will expand to the current full expansion of \bmacro{bla}. So TeX begins to fully expand \bmacro{bla}; according to the current definition of \bmacro, the first expansion step yields \edef\tempa{bla} \@cdr\tempa\@nil, and TeX looks at each of these ten tokens, in turn, to see if it happens to be expandable. Now:

In conclusion, \tempa is defined as a macro whose replacement text is

(nine tokens). This completes the execution (not expansion) of the code

What remains now in the token stream is

(of course, \@nil has been gobbled when the arguments of \@car where fetched). This again is an expandable token, whose current expansion is

because of the definition we have just performed. So TeX processes \edef, which is unexpandable and is hence executed in the stomach… and, well, I think that now the reason of the error is perfectly clear.

9
Implementing car and cdr in TeX
4
Allow macro to end without new line
5
Can I expand a macro argument once without using a scratch register?
5
\par in the parameter text (as an argument delimiter) and \vbox{#1} in an \everypar macro
3
How to expand control sequence in argument of a macro
5
Expanding FULLY a macro as argument
4
Check if macro is fully expandable
1
Xypic compiling error with auctex
8
Expand an argument into a string