Why do I have to use \par if I change font size withing a group scope?

I was working on a Beamer presentation, and noticed that, if I open a group scope and use a \tiny, the font size will bet set, but there will be a large space between lines. However, if I issue a \par at the end of the paragraph, it works as intended:

Here's a comparison between not using and using \par: 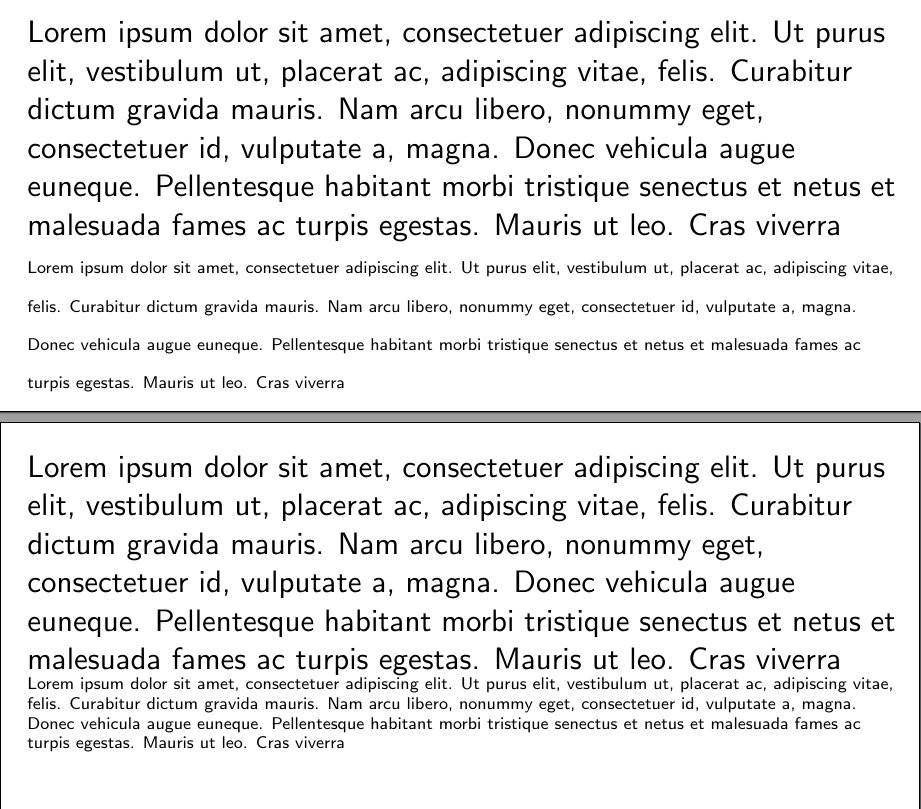 Johannes_B has (very concisely) given the answer -- "\par fixes the line spacing." however, maybe a bit of explanation would be useful.

since tex breaks lines by paragraph, there's a lot that isn't known until the paragraph is ended, at which time line breaks and other font-dependent attributes (like \baselineskip) are "frozen". so whatever is in effect when \par is encountered is what is used for the whole paragraph.

if you follow multiple lines in a paragraph in "huge" type by a segment in \tiny, it may look like the line spacing of the huge part isn't affected, but it is -- the usual extra "leading" between lines won't be there. this will be abundantly obvious if you use lowercase type and one line doesn't have any descenders.

in your example, you have isolated the \tiny component in a closed group, so after the lines are broken, the line spacing of the larger font is used. if you had not so isolated it, you would have seen that the lines of larger type were much closer together, using the \baselineskip of tiny in force at the end of the paragraph.

latex "protects" many environments from potential problems when type size is changed by including \par before the end of the environment, so a user is probably not aware of this nicety.

in math documents, it's sometimes necessary to decrease the type size of a displayed equation. in such a situation, it's always necessary to check that the baseline spacing of the preceding paragraph hasn't been affected, and if it has, extra manual adjustments must be applied.

here is an example using the scenario described for a math document. this is much more insidious than the pure text situation described in the question, but the principle is exactly the same -- \par is needed to prevent an unwanted result at a size transition. 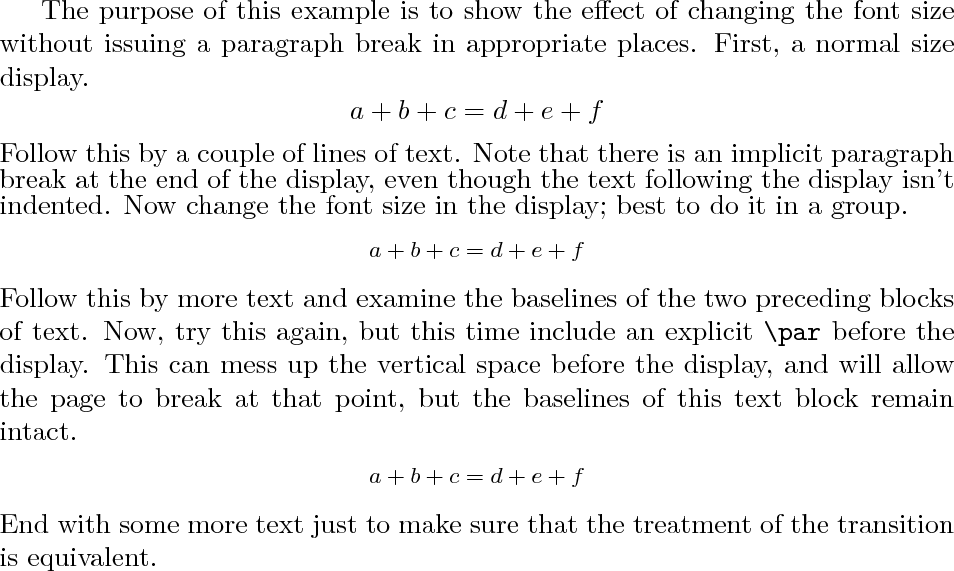 here is the input, which uses no packages, only a "basic" document class.

Not the answer you're looking for? Browse other questions tagged fontsize paragraphs or ask your own question.

1
Bug with curly braces and \fontsize?
1
Why is the linespacing larger inside an empty environment?
1
How to make a title of two or more lines? (revisited)
1
How to change linespacing according to font size?
0
Incorrect line spacing when text is in curly braces
187
What are the most common mistakes that beginners of (La)TeX and Friends make?
0
Break between lines because missing $