I noticed the following unexpected (by me!) behaviour, illustrated by this MWE and its output in the figure below: 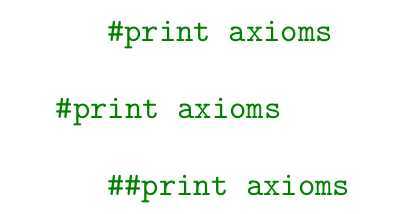 It looks like the command to \li is interpreted as both a # and a ## (see What is the meaning of double pound symbol (number sign, hash character) ##1 in an argument?), which is rather odd!

From a typesetting perspective, the obvious "solution" to my problem is to use \mintinline{lean}{...} rather than the \li alias. But I'm also curious to know what's going on with the code. In principle it seems like \li should work, and, indeed, it does for input that doesn't start with a #.

You are dealing with a verbatim command and especially its verbatim argument which is always dangerous. And you are overriding any special argument handling that minted may have by passing the parameter from your macro definition. A better version would be \newcommand{\li}{\mintinline{lean}} which leaves processing the argument to minted.

Aside: minted provides \newmintinline which is basically intended for creating such macros.

Not the answer you're looking for? Browse other questions tagged macros minted parameters or ask your own question.

82
What is the meaning of double pound symbol (number sign, hash character) ##1 in an argument?
0
newcommand to apply mintinline for C++ breaks on include statements

4
mintinline command not compiling with pdflatex
3
Problem with \mintinline{latex} and ToC
7
Avoid space when using mintinline wrapped in a new command
4
Can I specify a parameter that I pass with input?
3
Unwanted indentation with `\mintinline` [possible bug]
0
Redefine macro in macro with parameter
3
Testing parameter as "empty" when it has nested braces
2
breaklines doesn't work with \mintinline
4
Pass a parameter from preamble to command