I have a number of 'decision tree' type of charts I am trying to produce dynamically (rather than in Illustrator or OmniGraffle). Each chart contains a few hundred nodes. Because of the number of nodes, it would be particularly useful to be able to use 360 degrees of space surrounding the root node (much like a mindmap or a circular phylogenetic tree).

I don't have strong preferences about where every single node is exactly placed. The dynamic layout possibilities of LaTeX are therefore great (I don't want to place hundreds of nodes by hand). But the layout will make a lot more sense and be more aesthetically appealing if I can, at times, 'nudge' the angle between parent and child nodes.

I have seen there is a way to do what I want in TikZ with grow cyclic but I can't figure out how to incorporate that into a tree made with Forest (I am new to LaTeX, but my understanding is that Forest is TikZ-based, so my intuition is that this should be possible).

Is there a way to radially layout trees in Forest, or should I be using a different tool?

As a quick (and very simple) example, this code: 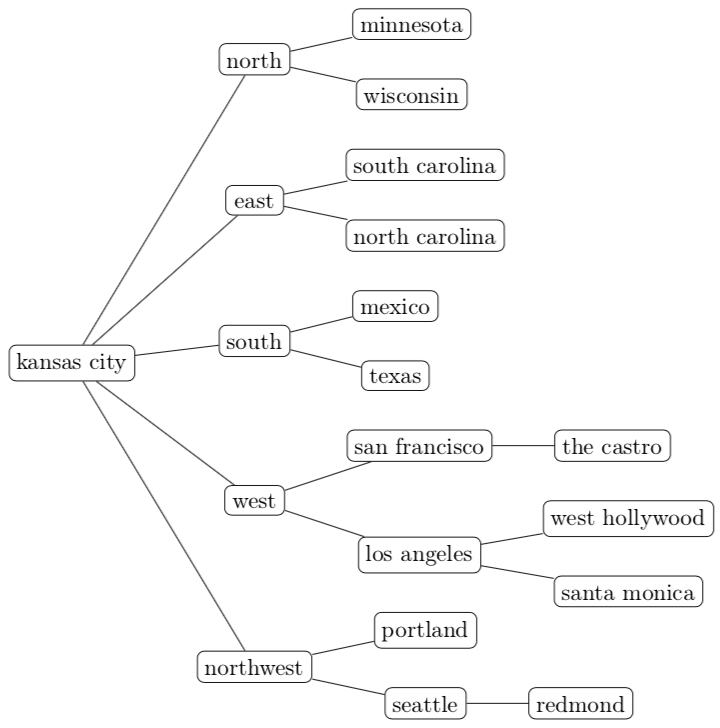 But really, to make more sense to a person viewing, the first level nodes (east, west, etc) should be distributed radially around the root node, sort of like this extremely crude mockup ... 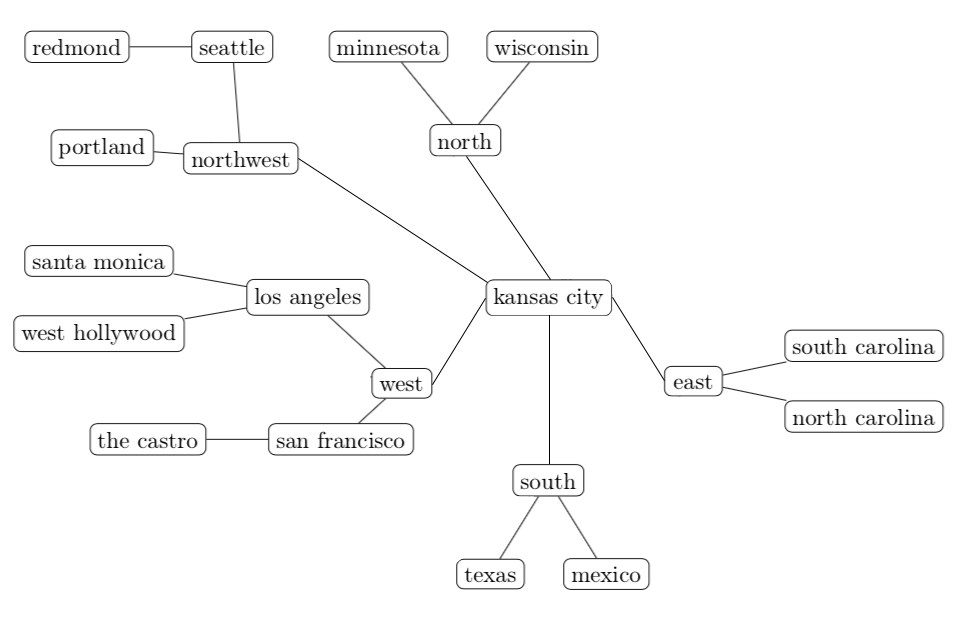 ...and if any given node has 8+ children, using more than 180 degrees of arc to position those children really would make sense, IMO. For example, see the 'l' node here with 9 children: 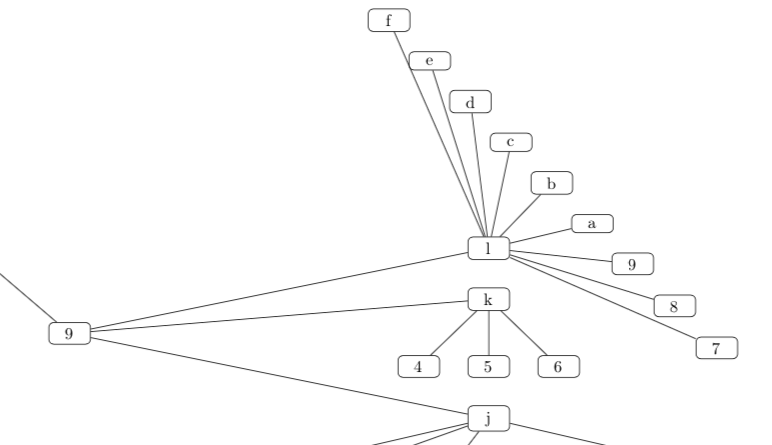 I will also note that I am aware of calign but using it to align child nodes to anywhere over 179 degrees apart will cause a 'divide by zero' error for Package PGF. Anything over 160 degrees looks aesthetically horrible because of small angle issues that cause the node connections to lengthen significantly, but it does work up to 179 degrees. Example code snippet:

I am okay with switching to TikZ or something else if I need to, it's just that I have sunk costs with Forest and it does otherwise seem to be ideal for my uses. (The only workaround I can think of is to make each chart actually 4 "fractional charts," where each of the four covers one quadrant, and then merge the outputs afterward. But this seems like such poor practice I figured it was time to ask here.)

This answer is based on How to combine a top-down and bottom-up binary tree in one picture?

It draws five trees, one each for the north, east, south, west and northwest groups of cities. Each tree is saved using \savebox. Each tree has customized growth directions and anchors to suit its design. For example, the north tree uses grow'=north, child anchor=south, parent anchor=north, and so on for each tree. For the tree growing north west, it may be necessary to play with the anchors to get a preferred arrangement of the nodes and edges. The individual trees are then drawn using \node, and positioned using the positioning library syntax. Each tree is connected to the root node, Kansas City, using \draw commands. 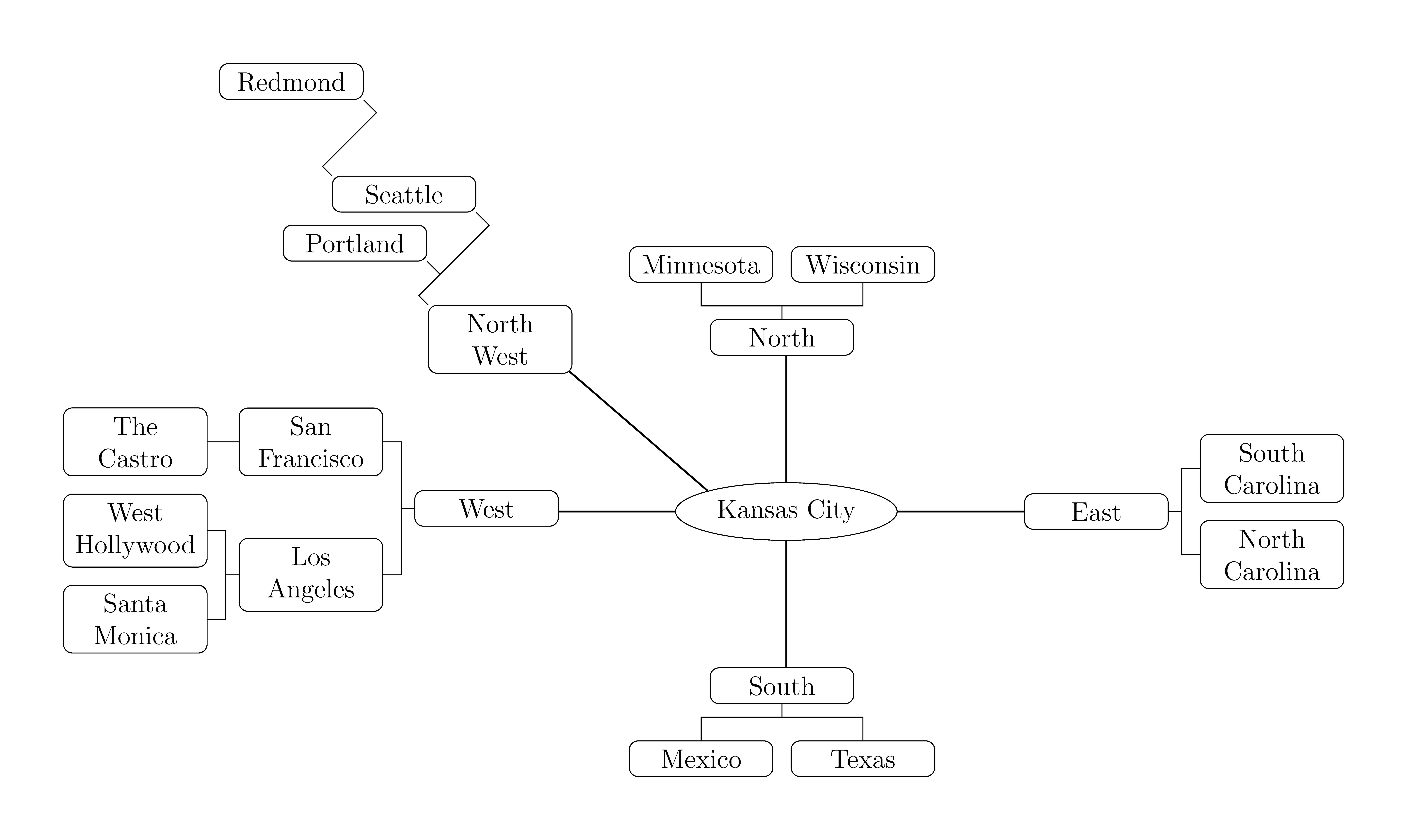 Conceptionally very similar to Ross' nice answer but instead of saveboxes I use Ulrike Fischers subnode trick. This allows one to connect the nodes rather than saveboxes. Still some manual adjustments necessary. EDIT: replaced the grows by grow' such that north carolina is north of south carolina, and also added makeboxes to save some space.

Not the answer you're looking for? Browse other questions tagged tikz-trees forest trees or ask your own question.

19
How to link different trees with TikZ
8
Lost in the Forest -- Merging after Branching?
3
How to combine a top-down and bottom-up binary tree in one picture?