In my opinion, l3 strings are special token lists whose where all characters has category code 12 (except space), and most interfaces in l3tl and l3str are similar. So, if I just want to process "plain" text, what exactly is their difference?

For example, should I use token list or string for option names, cross-reference labels? What is the best practice?

l3 strings are for low level tex programming constructs not for natural language texts, note in particular that in pdftex you can not have accented (or any non-ascii) characters in a string as they require active characters and inputenc processing.

The interface documentation itself is not entirely clear about that.

TeX associates each character with a category code: as such, there is no concept of a “string” as commonly understood in many other programming languages. However, there are places where we wish to manipulate token lists while in some sense “ignoring” category codes: this is done by treating token lists as strings in a TeX sense.

String variables are simply specialised token lists, but by convention should be named with the suffix ...str. Such variables should contain characters with category code 12 (other), except spaces, which have category code 10 (blank space). All the functions in this module which accept a token list argument first convert it to a string using \tl_to_str:n for internal processing, and do not treat a token list or the corresponding string representation differently.

As string is a subset of the more general token list, it is sometimes unclear when one should be used over the other. Use a string variable for data that isn’t primarily intended for typesetting and for which a level of protection from unwanted expansion is suitable. This data type simplifies comparison of variables since there are no concerns about expansion of their contents. 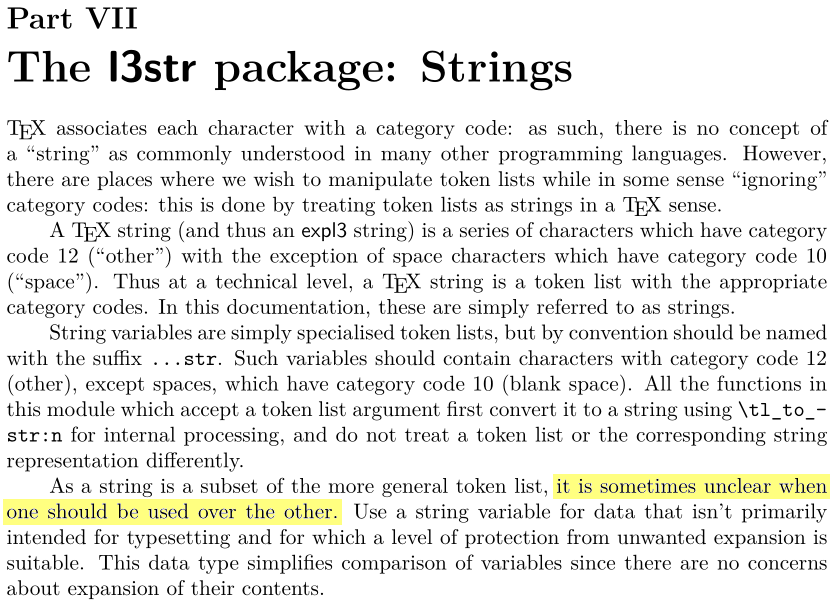 15
Comparing LaTeX3 token list to string
8
LaTeX3 Create environment around token list variable
4
LaTeX3 iteration and token list comparisons-code improvement
8
What are the constituents of a LaTeX3 token list?
2
Convert string to token list?
2
Latex3 programming and tex primitives: how to "execute after" instead of expandafter
4
Convert token to string in LaTeX3
1
Modeling a mapping from strings to lists of strings in LaTeX3
3
In LaTeX3, what is the best data type for storing, parsing and outputting free user input?
2
LaTeX3 Interface for functions