tikz-decoration: How do I use “is input segment is closepath=< options>”?

In the answer to this question TikZ decorations: How to draw a closed path little by little? @marmot uses this option of the decoration automaton in a way that I don't understand very well but that works perfectly thanks to pgf keys.

Indeed, according to the manual it is an option of the decoration automaton and as such it should be used as follows: \state{final}[if input segment is closepath=\closepath]{} but then the path is no longer closed.

This key checks whether the current input segment is a closepath operation. If so, the <options> get executed; otherwise nothing happens. You can use this option to handle a closepath in some special way, for instance, switching to a new state in which \pgfpathclose is executed.

Why does writing state{final}[if input segment is closepath=\pgfpathclose]{} not work?

Let me try to give you an answer that helps you a bit to understand what is going on. The main point is that I was sort of lucky when I gave you the previous answer. (OK, I also tried other things that did not work and then presented the one thing that did work. Yet writing this partial answer made it clear to me that I was not aware of some important things when I wrote the other answer.) I try to address your questions by rewriting my code in such a way that the decoration switches to a separate state when on the close path segments. I added several \typeouts in order to illustrate what's going on. Everything works in the way I thought it would except that

now the path does not close despite \pgfpathclose gets executed.

This what I mean by "I was very lucky when I wrote my previous answer". Why does closing not work here? Well, this is because one has to distinguish between meta decorations and decorations, i.e. between

where if input segment is closepath is defined, and

which the code is based on. (No, I do not think it is a good idea to do the same with a plain decoration because it will be very hard, at least, to make it work with general paths that are composed of straight lines of arbitrary lengths. If one had a quantization rule for the lengths of the line segments, that would be possible.) What this partial answer does here is to mix the two. This is the reason why the full path in \pgfkeys{/pgf/decoration automaton/if input segment is closepath=...} is needed. This does work in the sense that the automaton will switch to a new state, called close, when it is on the close path segment. Then it checks if it is almost at the end, and if so, it does something. However, contrary to my naive expectations, a naive \pgfpathclose does not work here. Unfortunately, I am not able to provide you with a cleaner working answer than in my previous answer (where I was quite lucky). I sort of understand why it worked there: the code switches to "ordinary decoration" mode and injects a \pgfpathclose there. I wish I could make it cleaner. Here is the code.

EDIT: I actually think there is a chance that the problem is deeper than outlined above. Consider the MWE

No decorations, nothing but a dash pattern to have the same effect. The final path of the first boundary is not closed 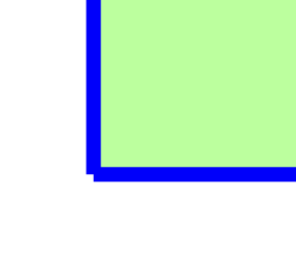 even though there the on phase is longer than the path. So for some reason TikZ does not even close this path. (If that would have worked, it would have been the basis a much simpler solution, one only would have to replace the hard coded 16cm by some \pgfdecoratedpathlength that can be read off as described e.g. here.) Of course, you could always close this simple path by hand:

but personally I would then think that my previous working solution is better even if I cannot rewrite it in the way you suggest.

Not the answer you're looking for? Browse other questions tagged pgf-decorations or ask your own question.

6
TikZ: Decoration with 1cm zigzag in the middle of a link
2
Piecewise styling and decoration of a tikz path?
12
How to improve on this “twolines” decoration?
4
TikZ crosses-decoration does not work
7
TikZ/PGF decoration that adds noise only to y coordinate
13
Making custom Koch decoration with angle parameter in Tikz
1
What is an 'input segment' in the context of PGF decorations?
1
Tikz: name path gets lost when using markings decoration