My goal is to write a \unitvector command which produces bold upright symbols with a bold circumflex accent. Here's my MWE: 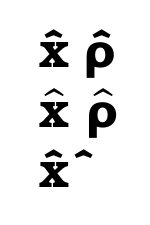 There are other questions here which are similar to this one, but as far as I can tell, they either do not use unicode-math, or they do not provide a bold circumflex accent. (If I'm wrong about that, I'd love to know.)

I believe I understand why \symbfup doesn't do the "right" thing: Unicode does not define a "mathematical bold circumflex accent" (which seems like an oversight to me). I also do not have the luxury of using a math font which has a corresponding bold math font (such as XITS Math), which I believe would also provide a solution. Hence the attempted workaround using \text which, unfortunately, is not a workaround at all as it does not work.

I attempted to use the range feature of unicode-math to switch out fonts in some clever way, but I failed to find an incantation which worked.

It seems that there should be a way to nudge the accents over, but I don't understand yet how \Umathaccent works.

You can just skip unicode-math and load XITS Math Bold as a LaTeX Symbol font: 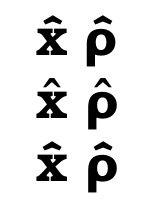 Works only with lualatex. For xelatex you can use the FakeBold option.

Not the answer you're looking for? Browse other questions tagged bold unicode-math or ask your own question.