I have a defined a TikZ style "midcircle" that decorates a path with, say, a small circle in the middle (with the decorations.markings library, setting "pos=0.5"). E.g.

would draw a straight line with a circle in the middle. Now I would like to be able to change the position of the circle by defining another style, say "midcirclepos", such that e.g.

would draw the circle at "pos=0.7" instead "pos=0.5". I think I've seen such constructions, but I can't find any more how to implement it.

By the way, I can't use the usual default arguments for TikZ styles, because my "midcircle" already takes other arguments that also have defaults.

Here is an example that also shows that the change to midcirclepos is temporary. 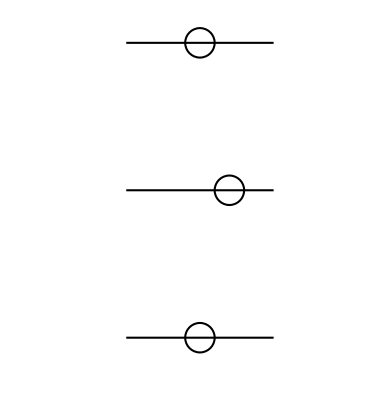 Not the answer you're looking for? Browse other questions tagged tikz-pgf tikz-styles arguments or ask your own question.

10
How can I add nodes through a TikZ style?
5
How can I design a DVD tray template to for my DVD label printer with TikZ?
1
Close scope for global options in a tikz-pgf path
17
How can I draw edge bundles with TikZ?
2
Encode edge style parameters with variable argument count in \foreach list
6
Adding nodes through a TikZ style, using double dash lines ``--``
0
How to draw ER-Diagram-like specialisations (draw a direction-sensitive shape in the middle of a straight line) in TikZ?
1
How do I make a multiedge/tree-edge from a node to a box in latex-tikz?
2
tikz tangent arc between two circles