How to display the unused acronyms and just the used glossary

I am using separated lists for acronyms and for the glossary (definitions). I want to display all the acronyms even the unused (without the number list will be great. I guess we need to use nonumberlist option). However, I want to just display the used glossary with the number list. This is a portion of my code:

But it does not do what I want for the glossary. It displays even the unused item in the glossary and adds a weird number list to all the items (the page number of the acronyms !)

This command iterates over each glossary in the list and does \glsadd{label} for each entry in that list. This indexes each entry with the current location (which defaults to the current page number). This means that you get the same number for every entry appearing in the location list. (If you have nonumberlist then this isn't a problem as that suppresses the location list.) This is the reason why you have a spurious number in your list.

There is a similar command \glsaddallunused which works like \glsaddall (and again has an optional argument) but it does \glsadd[format=glsignore]{label} for entries that haven't been marked as used, and does nothing for entries that have been marked as used. The glsignore format is a special location format that simply ignores its argument. Since both makeindex and xindy require a location (because they're both general purpose indexing applications), this will be added to the location list as \glsignore{location}. If it's the only location in the list, then it won't be noticeable. However, if there are other locations in the list, then you will end up with a spurious comma. So it's always best to put \glsaddallunused at the end of the document if it's required:

The above example uses the dummy entries provided with the glossaries package and produces a two-paged document, which starts: 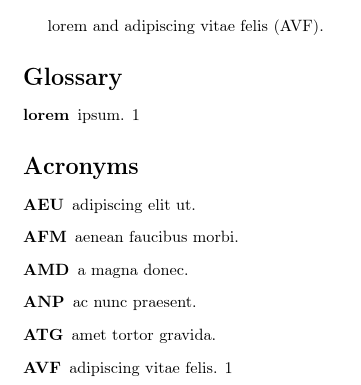 Only the entries that have actually been used in the document have a location (1 in this case as they're all on page 1).

If you prefer to switch to glossaries-extra and bib2gls then glsignore is recognised as a special location format, which indicates that the entry should be selected but no location is added to the location list. However, in this case you can just use the selection=all option to select all entries, regardless of whether or not they've been used in the document. (In fact, iterative commands like \glsaddall and \glsaddallunused don't work with bib2gls as the lists are always empty on the first LaTeX run.)

The bib2gls equivalent to the above is:

7
List of acronyms not created
1
glossaries outputs only one entry for custom list
2
Combined glossary and list of acronyms: Same backlinks for full entry and acronym, or none at all at the latter?
37
Best solution for acronyms, abbreviations, glossary and index
1
How do I get my acronyms out of the main glossary?
2
glossaries: acronyms: avoid additional entries in number list with indexonlyfirst and acrshort
2
Create separate list of acronyms and glossary