I'm new to LaTeX and I'm trying to recreate a PDF file to look exactly the same. Now I managed to get all equations and everything correct. But the formatting is abit off, in the original document there is more space between letters in certain places.

I've read many posts on this and other forums, PDF files explaining features etc but can't find a solution to my problem, that's why I'm posting my question here!

It shows in the second sentence, very subtle but obvious when you compared the documents on top of eachother. (My document has showframes on because I thought my margins were off thats the reason for the black bars)

This occurs on multiple places throughout the document and I have no idea why. Any help would be appriciated because I've been trying to fix it for the past two hours without success.

Here is some of the code were the error exist in text:

It is rather easy to find examples that produce your problem. E.g. an additional empty line before the following text: 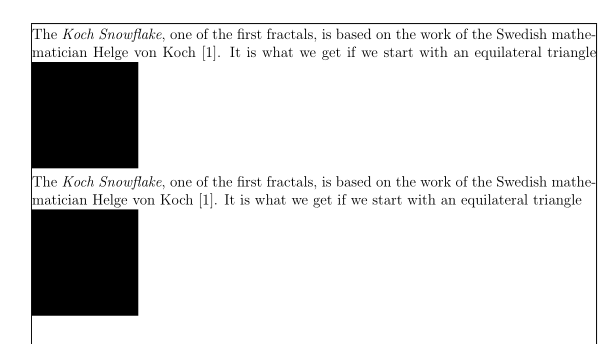 A different \parfillskip could be a cause too. But without more context and code one can only guess.

Not the answer you're looking for? Browse other questions tagged horizontal-alignment or ask your own question.