How test value of a command with `\ifthenelse` and `\equal`?

I want to assign a string as the value of a command and then take alternative actions (by means of ifthenelse) according to whether the value of that string equals a particular value.

What is wrong there with my \ifthenelse{\equal{\thing... test there? The command \result is never given a value, for a latex run gives error:

In the actual project, which is book-length and involves a preamble consisting of some dozen "helper" files that are input in the root document, several "style" commands such as \thing are defined in root document in order to allow choosing among alternatives for each of various aspects of the overall document design, e.g., text width, font families, header styles. In those "helper" files, \ifthenelse tests are used for each such "style" command (instead of the simple-minded definition of \result shown in my MWE).

Thus I will be able to change such style parameters just by changing a word in the root document preamble, without having to burrow into the individual "helper" files and make edits there.

Using the generic TeX package texapi— or otherwise — (along with ifthen) I want to "declare" a string name, assign a string value to that name, and then take some action conditional upon that value.

Is this possible and, if so, how?

(The packages I've looked at, namely, xstring and stringstring, give lots of commands for manipulating and testing strings, but do not seem to have commands to assign a string value.)

The code doesn't work because you're using wrong syntax for \ifthenelse.

this is something else.

Removing \string will give the expected result

You seem to be using

but this is not the right way:

is the correct syntax.

In your code the <code for false> was \par (because you missed the third argument to \ifthenelse, so TeX picks up the \par generated by the blank line). Since the test returns false, nothing is defined.

On the other hand, if you remove \string so the test returns true, you'd end up with \result being undefined, because you'd execute two \newcommand instructions, but both inside a group.

For a more general approach:

The optional argument to \stringcase can be omitted and in case of no match nothing would happen. 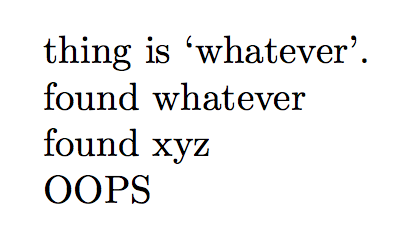 Not the answer you're looking for? Browse other questions tagged conditionals syntax ifthenelse xifthen or ask your own question.

1
How can I reduce the "Underfull \vbox badness" warning if I have a tcolorbox box that almost takes up an entire page?

16
Numerical conditional within tikz keys?
0
Simple ifthenelse fails when included in a command
9
\ifthenelse + \equal behaves weirdly
4
Why does this test with ifthenelse not compile?
3
Checking a command with \equal and then using that command for another command?
0
Error with ifthenelse
3
Add tocline depending on string compare
2
\ifthenelse as an argument to \equal
0
Use multi ifthenelse equal text