Bug? ibidem in floats with the `floatrow`-package

When I use the floatrow-package with biblatex and a citation style that uses ibidem-tracking, usually, when I cite a publication twice, the second time the citation gets replaced with (ibid.) (or ebd. in Germany) indicating a reference to the same source as before.

Citing inside the caption of a floating object though, the full citation should show up always, instead of the (ibid.) short.

This behaviour seems to be broken when using the floatrow-package instead of float.

The output of this MWE:

Can you confirm this? I guess this is not intended? Is there a workaround for this? (I don't need a workaround ATM, but maybe someone else does)

And finally, if it is one, where should I report this as a bug? (since I have zero experience with bug reporting)

There are several possible work-arounds for this. You could initialise \FR@flboxreset in \AtEndPreamble as well, if the \AtEndPreamble call comes after biblatex's preamble definitions the modified \@floatboxreset will be picked up 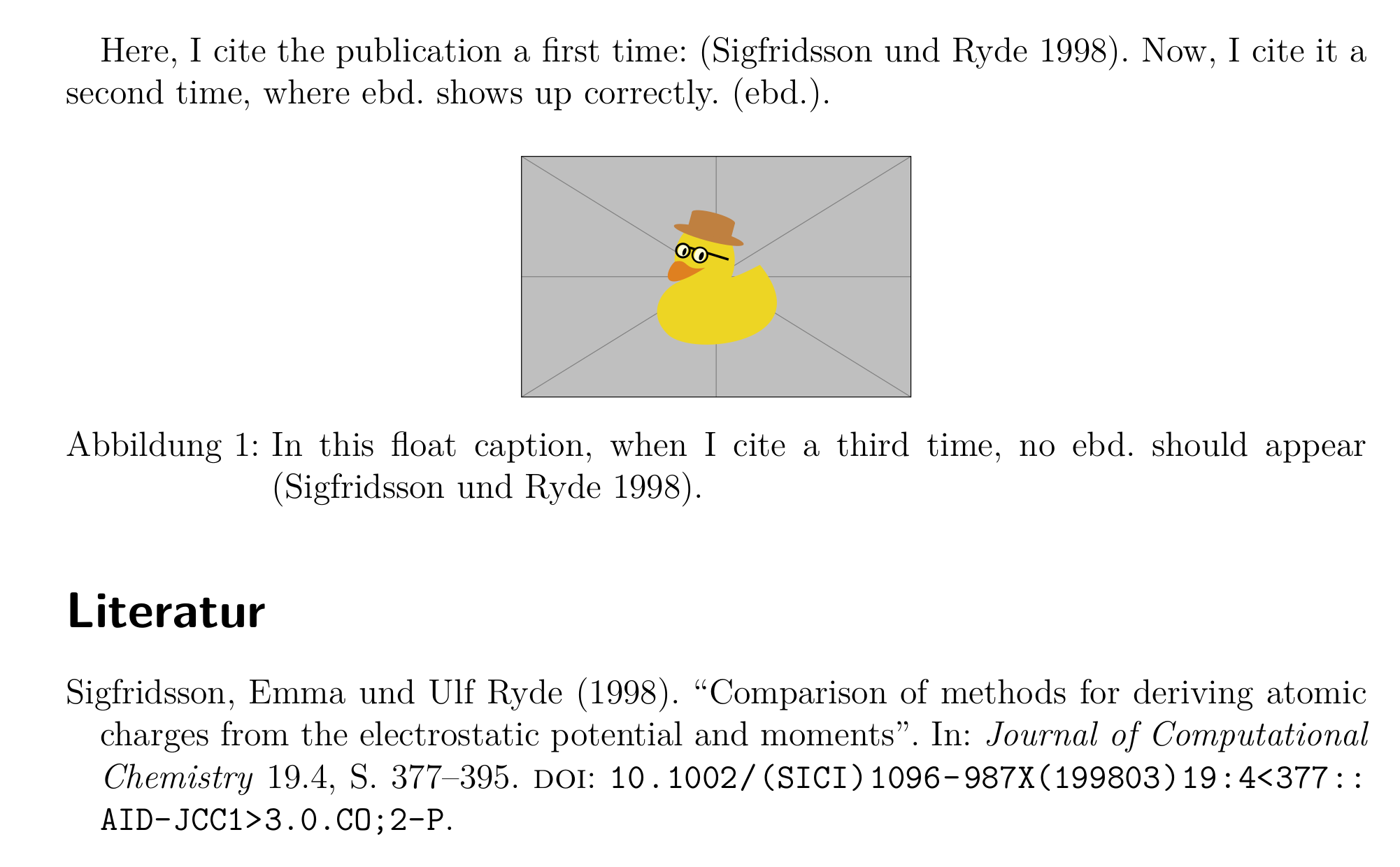 Alternatively, one could execute

Is this a bug? Whose bug is this?

This is a tricky. The behaviour does not seem to match the description in the biblatex documentation, so you may call this a bug. (I could try and wiggle my way out of this particular case because a [H] figure is not really a float any more and so I could argue that §4.11.5 Trackers in Floats and TOC/LOT/LOF of the biblatex documentation does not apply. That does not hold a lot of water since the problem persists even with non-[H] floats as long as floatrow is loaded.)

To get things like this right biblatex needs to meddle with many things that normally do not fall within the scope of a bibliography/citation package. LaTeX being LaTeX there is almost no guarantee that the code biblatex needs to patch is going to behave as expected with all class and package combinations.

I am fairly confident that \@floatboxreset is not the completely wrong command to patch into and I also believe that the cautious approach of patching the macro as late as possible has its merits. So I'm not sure if there is something biblatex could do better in this case except of course for checking for floatrow or patching \FR@flboxreset.

At the same time I don't think floatrow is really in the wrong here either.

Given that floatrow has not been updated since 2009 I'm not sure if you well be able to contact the maintainer. Plus I'm not exactly sure what floatrow should do better (sure, it could initialise \FR@flboxreset later, ...).

You could also open an issue for biblatex at https://github.com/plk/biblatex/issues. It is possible to fix this on the biblatex side with relatively little effort. I personally don't find it that brilliant that biblatex has to have patches for so many different packages and classes, because maintaining these patches requires keeping an eye on possible changes in the code of the relevant packages and classes.

Not the answer you're looking for? Browse other questions tagged biblatex floatrow or ask your own question.

14
Difference between \footcite and \cite in BibLaTeX
20
Biblatex: tricks with repeated citations in footnotes
3
biblatex messing up citation entry with lots of authors
2
Biblatex: Refer to footnote of first citation in citestyle verbose-ibid
2
How to use Biblatex with square brackets and hyperref
0
BibLaTeX crashing when using multiple entries from same author with no date
3
Getting ibid for apa-style citations from biblatex
1
Cite only the first author for ibidem citations
0
Cite same author with different articles (biblatex-aer)