Draw a line within a rectangle

I have the following piece of code:

Which is a simple rectangle. I would like to draw a straight horizontal line inside it, which divides it in two equal parts, and write something in them (therefore above and below the straight line). Is that possible within this \tikzstyle ?

Try with the shapes.multipart library of tikz

Another possibility is to use a matrix, in which case you can add any directives to the cells.

Or you can just use fit to draw a contour around two stacked nodes, to which you can pass any parameters you like.

As @BambOo 's examples show, there are a variety of ways of approaching this. Here's yet another approach.

I tend to like to keep the content of my document as clean as possible and hide all the messy inner-workings else where. Even for a one-off because invariably I find myself reusing that code at some point. 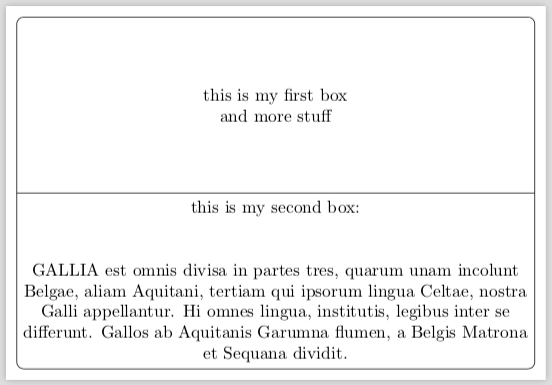 Here's the full code to create this:

I tend to underutilize TikZ text node formatting capacities. On the one hand, this is because for the documents I create, I like to perform various manipulations of the content of my paragraphs to a degree that using TikZ node syntax just creates headaches.

On the other hand, I also have a strong preference to keep the different parts of my document clearly defined and separate. So, I handle text processing in one part and drawing diagrams in another and then integrate the two in the final product. I find the code easier to read and easier to tweak in the future.

One key issue is how to guarantee that the two boxes are drawn to the same height: namely the height of the tallest box. For me, this is reason enough to separate text from picture. By creating two boxes, \aeboxA and \aeboxB I can measure their total height:

And then use the pgf's clear syntax to find the maximum height between the two boxes.

Another difficulty it sounds like you're encountering is managing the minimum height. It's probably being realized as you want, but is being calculated in a manner you might not be considering. So, even if my code isn't to your liking, I'd suggest playing with it. I've set up parameters in there to allow you play with things a bit to see what happens.

Most likely the issue you're encountering with minimum height is that the value for inner sep is also a part of this height. If inner sep=0, well then there's no problem. But, if you're like me, you may like a fair amount of white space to form borders.

My approach here was to set the minimum height to the total height of the tallest box plus twice the inner sep. That way I don't have to know ahead of time which box is the taller or what that height is.

This answer is really for you to play with and get a better sense of where what is happening.

So, adjust the value of \aeinnersep and perhaps rewrite the line

and then uncomment the last two \draw commands in the definition of \aeboxtwo. This way you might get a better picture of what's going on. In particular, for the case where inner sep is nonzero, you'll notice that the horizontal line drawn between the two boxes isn't really in the center if you've not take the value of inner sep into consideration when setting the minimum height.

I hope this helps clarify things. Probably the split node approach is more suited to your needs. I'm just hoping this answer can help you see what's happening with inner sep and minimum height. And,... perhaps it can help illustrate a certain value in separating out text formatting from drawing pictures (or rectangles).

15
How to make tikz multipart node parts have uniform size?
5
How to draw a slanted rectangle divided by two using tikzpicture environment

11
Horizontal alignment within an equation using Tikz
11
How to define the default vertical distance between nodes?
11
Multi-line box around a sentence in a paragraph
3
How to draw stacked rectangles (in a third dimension), but with the intersected lines clipped + grid pattern for each rectangle + shaded fill + text
3
Draw rectangular nodes defined by opposing corner coordinates with vertically centered text
5
tikz - gradient along a bendy path
1
How can I have TikZ automata accepting nodes be the same size as nonaccepting nodes?
6
How to draw a diagram of custom subject correlativities