I have two images which I try to include in tex (greater context: trying to convert ipython notebook to tex which also has output images). I find a weird scaling problem. Both images are comparatively similar, only one is little lower. The lower one is scaled too low, lower than its normal size, while other one is scaled fully.

This is without any size specification. Below is the code. I have also given the separate links to images so one could MWE.

Below is the output (pdf): 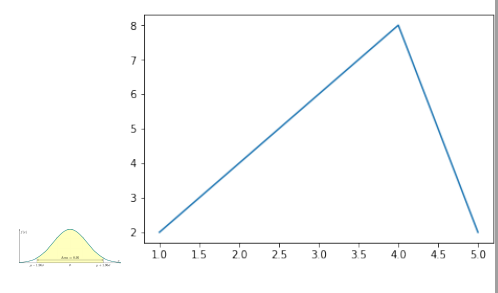 I initially thought it would be something to do with ipython (in fact it messes up with includegraphics width), so I isolated using above code, and thus individually also, my first shorter image is treated badly. Why is it so? :(

To isolate further, I also tried the same in online IDE but still same output. Please check it here

Here are the 2 images for you also to try:
1. Problematic png image
2. Normal png image

Afaik, image is not a problem as they appear correctly on notebook. Why tex shrinks the former image is the question to be tackled.

Constraint: I could add a custom width to adjust this misbehaving images but I do not want to do that (its normal sized in the notebook) mainly because ipython has redefined includegraphcis and I do not want to mess with that. Probably if max image size restriction if any there for this latex issue needed, I could try to make my script generating the problematic image to keep it of that or within that size.

Update: First doubt: I rechecked document properties again as hinted in comments, and find that the problematic image's size in cm are low compared to other image's size in cm. I have created a ticket for tikzmagic on that as well, here. however, currently tikzmagic does not support altering size in cm afaik, so looking forward if anything could be done from tex side.

1) PNG default should be 96dpi (suitable for screen or web rendering) you only get scalar problems setting different unless its needed for other printers reasons.

2) using 64bits per pixel on graphics that at worst need 24bpp (in this case even 4bpp would be overkill) is nearly tripling storage requirement and likely tripling compilation time and most importantly if published without correction then tripling the decompression time times the number of readers.

Not the answer you're looking for? Browse other questions tagged graphics pdftex includegraphics or ask your own question.

2
CMYK poster example: fitting pdf page size to (bitmap) image size?
18
Attach displayed image to the PDF without storing it twice
7
moderncv - filesize of pdf too big
1
Global scaling of images in html output (only) of htlatex
2
Wrong dimensions when using \XeTeXpicfile with CMYK image
0
How to place an “Export as PDF + Latex from Inkscape”-image above a \includegraphics image (overlay) - Make centers match
0
Macro for Copy/Paste Image in Tex file
6
Use alternate scaling of the image if there is empty space available
1
How to vertically align and scale images within a tabularx environment