I am trying to write my class notes using LaTeX, and sometimes I need to explain how to get from one result to the next in the middle of an equation. To do this, I use an arrow that points to a smaller text where the explanation is. But the problem arises when this text contains both words and math expressions, because the sizes of both do not match. This can be seen in the following example:

In the output, $\cos\alpha$ looks too small compared to the text that comes before it. Are there any other commands used to specify size in math mode, that can produce a result between the normal size of math expressions and the size I can get using \scriptstyle?

Writing up your own class notes is a perfect situation for using TikZ. I take a rather different approach from you, but you already have several answers following your lead. I just want to illustrate a different approach to this.

Improvement of the above environment.

If text follows the above approach. There will be a potential class with the tikz picture. The following improvement to the environment minimizes this effect:

which, if there's following text produces the following sort of result without the user having to do too much more work. Namely, content from the first line of the text following the environment needs to be fed as the second non-optional argument to the environment:

Thought process behind the update

As already mentioned, the original approach may result in a collision of text and markup.

You could, of course, manually enter your own vertical correction. But, what a pain in the neck! It would be nice if this could be done more on the fly, and only require you to manually tweak anything in an odd-ball scenario.

So, I've improved the environment. What I'd really like to do is obtain information from the bounding box. But the overlay stops the bounding box from even being calculated.

First thought: remove the overlay from the environment. However, that alone would create an undesirable result: 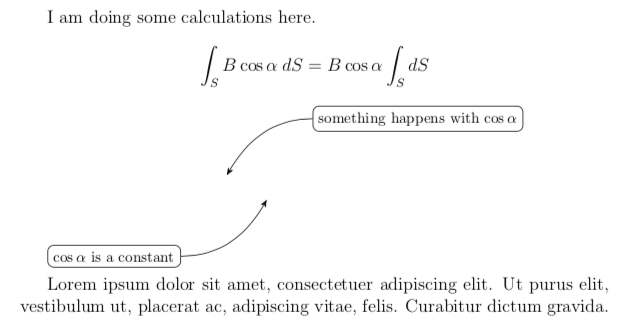 So the key to emulating overlay without directly invoking it is to reset the bounding box once everything has been prepared. Since no overlay was used, I have access to the bounding box (before resetting it). Thus, I know where the bottom of the picture is.

Of course, that raises a sticky issue. What if the bottom of the picture is above some other content. If I merely find the bottom of the bounding box, my improvement winds up creating a different kind of collision of text and markup:

This is why at the beginning of the mynote environment I place a node which is act as a bookmark to remember the height at which this picture was originally created. That way I get a more visually pleasing result.

Using explicit \hspace commands is rarely required. You probably want that the explanation text is centered below the arrow, so just do it with an array.

I defined a command in order to avoid complex input.

You can also change the size of the arrow with the optional argument (default \Big).

Note also that in order to separate the differential, \, (thin space) is much better than \hspace{1mm}. Also, the T1 encoding is recommended (better, required) for Spanish, or hyphenation would be very problematic.

Not the answer you're looking for? Browse other questions tagged fontsize or ask your own question.