I would like to find out what options there are for applying syntax highlighting to Plain TeX, to turn Plain TeX documents into highlighted HTML.

The aim is to facilitate sharing tracked changes to the Plain TeX document. The document I wish to work with is fairly simple, but it does hand define several fonts, a bibliography environment, and make heavy use of \halign macros. Some automatic or semi-automatic handling of these would be an advantage. At a pinch I could do this with a sed script, but I would rather save myself some time.

Pygments does not seem to have support for Plain TeX. Emacs' AUCTeX has TeX-mode for Plain TeX, but although I seem to recall that it is possible to export HTML from AUCTeX, I cannot recall any details.

There is a plugin shipped with recent versions of Vim called 2html.vim. The idea is to export the current buffer - including the color scheme - to HTML. For example, I'll use Herbert's code from How to get started with plain TeX:

To use this plugin, put Vim in the normal mode and type: 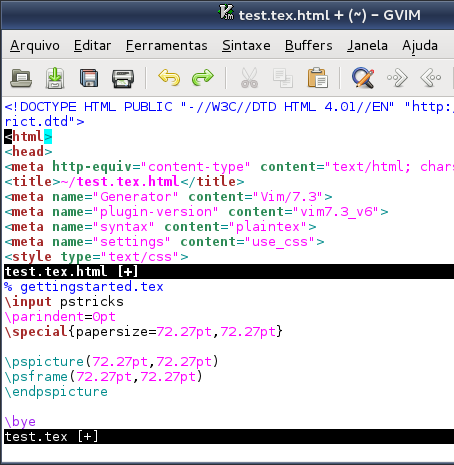 A new file named yourcode.ext.html is generated. The output is as follows: 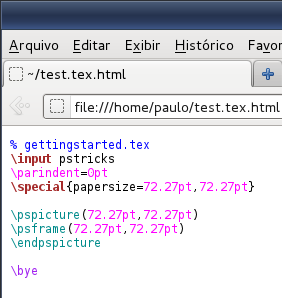 If I'm not mistaken, the choice of colors is related to the editor color scheme.

The generated HTML is full of inline styles. If you want a better output, I found the following entries to be added to your _vimrc file:

You can do the same thing with emacs. Load the code into emacs and do M-x ps-print-buffer-with-faces. It will print a postscript image of the buffer.

Not the answer you're looking for? Browse other questions tagged plain-tex highlighting or ask your own question.

5
How to get started with plain TeX
12
Code highlighting in ConTeXt
5
Use minted for plain-text? (without syntax-highlighting)