I have a (TikZ) diagram with several "blocks" of text connected by arrows. For reasons the (centers of the) blocks are not precisely horizontally aligned, but I'd still like my vertical arrows to be perfectly, well, vertical. Example: 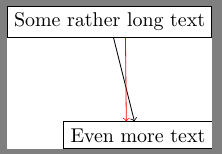 Instead of the black arrow, I'd prefer the red one which I've created by fiddling around with stupid numbers. Hence:

Is there a way to create, automatically, instead of the black arrow-between-centers, an arrow which is (1) perfectly vertical and (2) intersects the original arrow roughly at its center?

Or, if you want the arrow to be in the center, 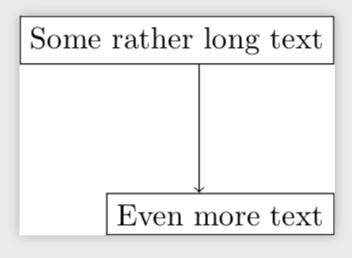 You can specify the horizontal and vertical position in terms of nodes. 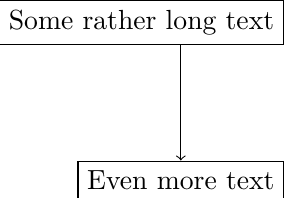 Not the answer you're looking for? Browse other questions tagged tikz-pgf alignment or ask your own question.

35
TikZ: What EXACTLY does the the |- notation for arrows do?

9
Align edges with anchor other than center
15
Natural transformation arrow with TikZ
17
How to define the default vertical distance between nodes?
17
TikZ: Drawing an arc from an intersection to an intersection
12
Drawing rectilinear curves in Tikz, aka an Etch-a-Sketch drawing
9
Why does my arrow head size decrease?
9
Line up nested tikz enviroments or how to get rid of them
3
Arrow between BTrees
0
How to rotate a node using atan2 function
1
How do I change the radius of circle in a node in tikz style?