I found a bmp image file online, right clicked on it, saved it as bmp format in a local directory. Using MS Paint, I could open and view the file. Paint says the picture-file is 42.2K bytes, 240 dpi, height 0.5in, and width 0.5in. But when I tried to insert the image into a plain TeX-coded document using XeTeXpicture, there was just a blank space where the picture should be. I bracketed the bmp image with letters a and b just to set the context. From an earlier question which was answered by Akira Kakuto, see Using Xetex to Include bmp file into document using Plain TeX I was already given a sample bmp file that worked. So it must be something about how I am saving the bmp image from the internet.

Microsoft Internet Explorer (and Edge) will allow users to chose save format for a web image. Given the choice most Windows users would prefer to save as 24 bit BMP (16 million colour) rather than 8 bit (256 colour) GIF

Actually in this example its 32 colour greyscale as BMP or 18 colour as GIF so there is a noticable difference.

Oddly if you then resave the new PNG as 24 bit BMP it magically is redefined as a 96 dpi BMP !!

This is the result 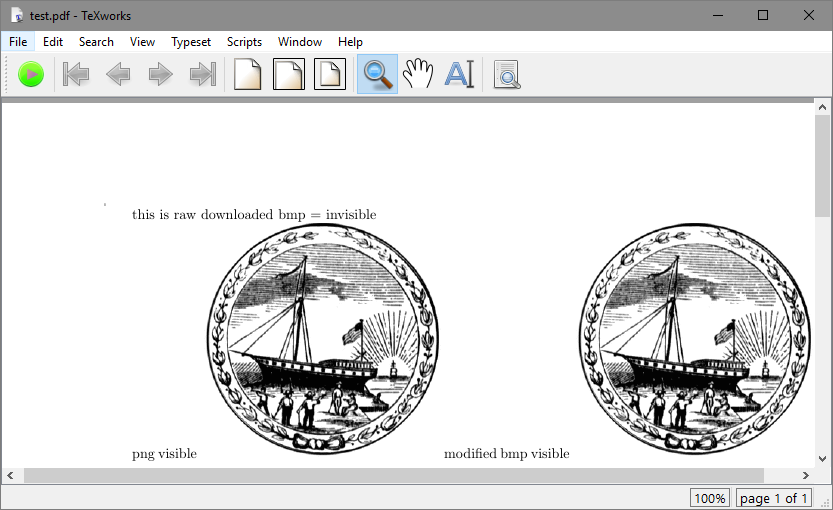 Not the answer you're looking for? Browse other questions tagged graphics xetex plain-tex or ask your own question.

0
xelatex does not pick up a .png file
1
Using Xetex to Include bmp file into document using Plain TeX

2
Why is LyX trying to convert every image into eps?
11
How to add a picture onto an existing pdf file?
1
Inkscape image only partially rendered
2
Can't locate 'xref' (1) error in BaKoMa Tex when including pdf-image containing LaTex
2
How to include a .bmp image in XeTex using plain TeX source file
1
Using Xetex to Include bmp file into document using Plain TeX
1
How to use the command \hangpun under xetex？
10
How to handle figures and images using MikTeX Plain TeX (not LaTeX) on a 35 year old document