How can I iterate over each single token in the #1 argument inside \myMacro? So basically I want to know how I can iterate over a list whose delimiter is not a comma or any other character but rather the token boundaries as applied by TeX. Note that the argument may contain control sequences that are undefined so they must not be expanded.

Example of what I mean:

which should result in

It is important to note that I also care about spaces so they shouldn't be gobbled away. Also I don't want to execute any code outside of \mymacro in order for this to work (e.g. changing the catcode of spaces before calling \myMacro).

As I am really into understanding how such a thing works I'd appreciate if you could also explain how and why your provided code works :)

My attempt at this was

But this gobbles away spaces and it produces an error for empty inputs or inputs ending with a space. 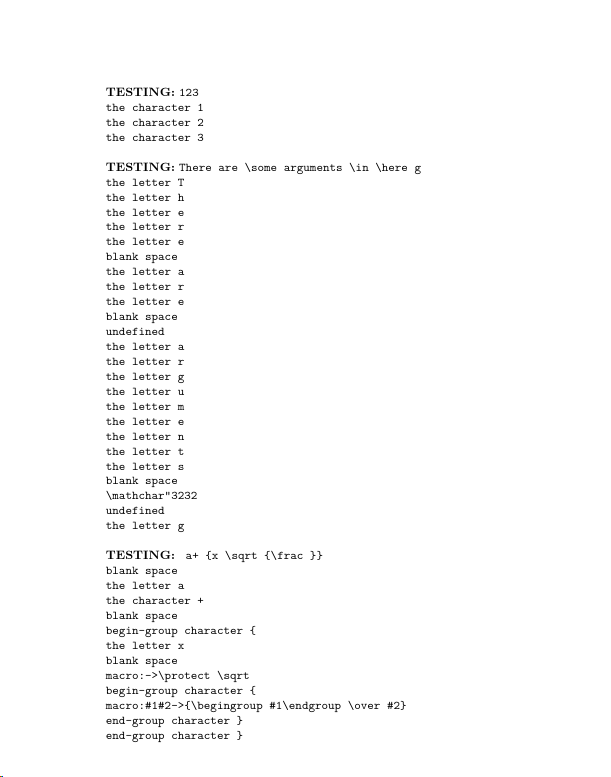 Note that this mechanism consumes the supplied list using \let (the form with = and exactly one space is important so it does not drop spaces or = in the input) that makes it easy to detect spaces and braces but for example it only captures the meaning of the token, it can not distinguish { from \bgroup nor can it distinguish between any undefined commands, or show which name was used, \zzzfoo \undefined etc will all appear the same in the loop, as undefined.

For similar reasons, you can not re-construct anything equivalent to the original input from within the loop. given \frac{a}{b} you get essentially \frac\bgroup a\egrup\bgroup b\egroup from which it isn't possible in general to reconstruct a working fraction.

So... whether these restrictions matter depend on the intended use of the loop.

If you need it for debugging, it's a one-liner:

If you run it with pdflatex -interaction=nonstopmode, the console will show

(This uses e-TeX, but that can be avoided.)

The basic idea is to grab the token list and examine the first token before branching and handling as required. I've not done it, but recursion inside groups is doable. Notice that all brace groups become { ... } (unavoidable in expandable code).

4
How to iterate through a token list to make characters uppercase, while preserving spaces?
5
Conditionally replacing sequences of characters
0
How to pass contents of environment (declared with \newenvironment in LaTeX2e) as argument to that environment?

18
Test if token is a control sequence
6
How best to run through a series of elements {a,1,i}, {b,2,ii}, etc
24
Why does TeX remove braces around delimited arguments?
16
How many different concepts of “token equivalence” are there in TeX?
17
How to read a stream of tokens up to one of two different delimiters
10
How can I create a better cryptogram environment?
11
Question about exercise 7.5 in TeXbook
3
How can I efficiently make TeX read each visible letter as a word?
5
a macro to print the catcodes of all tokens
10
Understanding Implicit Delimiters/Terminators