Problem with overlay when a tikzpicture is inside another tikzpicture

update i discovered lately this question where Nickolay Kolev uses \tikz inside a tikzpicture environment. A lot of users think that is a wrong practice and I agree that is very strange but sometimes very useful. I agree too that it's preferable to avoid this kind of situation. I use this possibility in pgfornament.

I don't understand why if I invert the two lines of the tikzpicture (the wrapper) I get different results. overlay I think, resets the bounding box but why inside the second tikzpicture, the overlay resests the general bounding box. When I use a scope, the problem disappears ?

update I suppose that tikz's experts think it's preferable to use a scope and the question is stupid ...

Or in the pgfmanual, I read

All graphic options are local to the {tikzpicture} to which they apply.

The picture in red has no bounding box.

The solution is to place the line with overlay inside a pgfinterruptboundingbox environment so the problem is linked to the current bounding box. 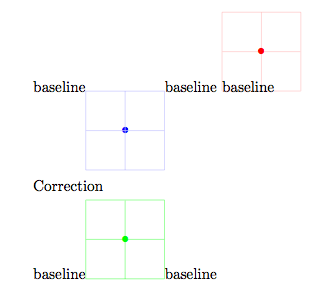 No problem with a scope

( What is the real differences between a scope and a tikzpicture ?)

update The question is perhaps too general, better is How tikz performs overlay ?

This is another example of where unexpected results can occur. The overarching reason is simple: TikZ doesn't expect its environments to be nested and therefore doesn't check various assumptions when it starts and stops. In particular, tracing through the code then one sees that TikZ goes to a lot of effort to work with scopes and groupings within a tikzpicture environment. Since some information has to be extracted from within a scope - for example, bounding box information - TikZ has to "smuggle" this information out and it does that is by using globals. It is quite ingenious how it does this in such a way that the information is passed only to where TikZ wants it to be passed and not, for example, out of any further grouping.

But with the main tikzpicture environment itself, it doesn't expect nesting and so doesn't use these complicated methods. With the bounding box, for example, it knows that \pgf@picmaxx is the maximum x-value of the bounding box of the current picture and that there is only one picture involved, so it can regard it as a global variable because that makes life so much easier: every assignment to \pgf@picmaxx can be global to avoid the hassle with groups and scopes. To avoid complications, all we need to do is ensure that at the start of a tikzpicture environment then all of these globals are set to their defaults.

Let's trace the assignment of \pgf@picmaxx through your code:

By the end of this command, it is set to 0.0pt, which is the maximum x-extent of that tikzpicture since it has the overlay key.

Due to the overlay key, we get an assignment of 0.0pt here, which is in effect until the end of the picture.

The reason that it works for scopes is that since scopes are meant to be nested, TikZ/PGF goes to great lengths to ensure that things like bounding boxes work correctly as scopes are set up and torn down. This, I think, is the answer to the most fundamental of your questions:

What is the real differences between a scope and a tikzpicture ?

To properly nest tikzpictures, one would have to look at the code for scopes and see what keys, lengths, and macros it goes to great lengths to preserve. Then do the same. This is, I guess, what you are effectively doing with your \savecurrentboundingbox and \restorecurrentboundingbox. I think that the question at the end of your answer would make a very good question in its own right. Even if, as I think, nesting TikZ pictures isn't a good idea, there are, as you point out, inevitably occasions when it is desirable. Knowing how to ensure that when one has to do it, one does it safely would be invaluable information (and, I think, it would show that one should not do this lightly so it would act as a deterrent).

A possibility is when an environment tikzpicture with \begin{tikzpicture} or \tikz is created a lot of variables and options are setup correctly. The path is now empty but why is it the same path ? 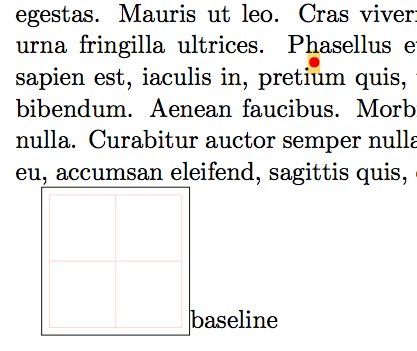 It will be interesting to know what are the important variables used at the beginning of an tikzpicture environment.

0
How to overwrite a node setting in Tikz to align Tikz pictures to nodes?
293
Correctly scaling a tikzpicture
35
Proper nesting of tikzpicture environments: Reset all PGF values to their defaults
16
How to avoid nesting of tikzpicture?
9
TikZ Scaling: Cannot scale a tikzpicture
11
TikZ inside TikZ-node with given text width does wrong positioning
8
Tree, then arrow, then tree
20
Nesting "tikzpicture" within "tikzpicture" elements - Good or bad practice?
21
What are most important variables set at the beginning of a tikzpicture? of a scope?
11
TikZ multipart nodes: How to set text attributes (opacity) for some/all parts
See more linked questions

1
Define tikz node based on pagenodes
1
Close scope for global options in a tikz-pgf path
9
Line up nested tikz enviroments or how to get rid of them
2
how to align several tikzpicture displayed using \only
10
How can I draw angled lines in LaTeX to create ruled template for calligraphy?
2
Arrows mess up bounding box of pics
3
Moving tikz node scales coordinates in scope
1
overlay a tikz picture with another
1
How do I change the radius of circle in a node in tikz style?