What is the best package out there to typeset proof trees?

So, I want to typeset some proof trees, i.e. trees of inference rules like those in natural deduction (see diagram below). Which are the best packages that you have found that allow you to do this, and which features do they have?

Peter Smith's very useful LaTeX for Logicians page offers suggestions both for downward branching proof-trees and for natural deduction proofs in both Gentzen sequent-style (the tree-like style you seem to be after) and Fitch-style.

I've not used any of the alternatives for proof trees, as I use Fitch-style natural deduction proofs. But, I've found Smith a most reliable guide and for your desire he recommends as best of breed Sam Buss's bussproofs.sty. Smith also has remarks about a few other alternatives that you might want to check out.

A quick example to produce your example tree would be:

I like mathpartir (by Didier Remy) for its simple and flexible design, and smart layout concept. The name stands for "math formulas in paragraph mode" and "typesetting inference rules". You can use it to typeset a number of rule definitions. For example:

You can also typeset a derivation tree:

To me, ebproof is definitely the way to go.

As the author of the package writes,

The structure is very much inspired by the bussproofs package, in particular for the postfix notation. I actually wrote ebproof because there were some limitations in bussproofs that I did not know how to lift, and also because I did not like some choices in that package (and also because it was fun to write). 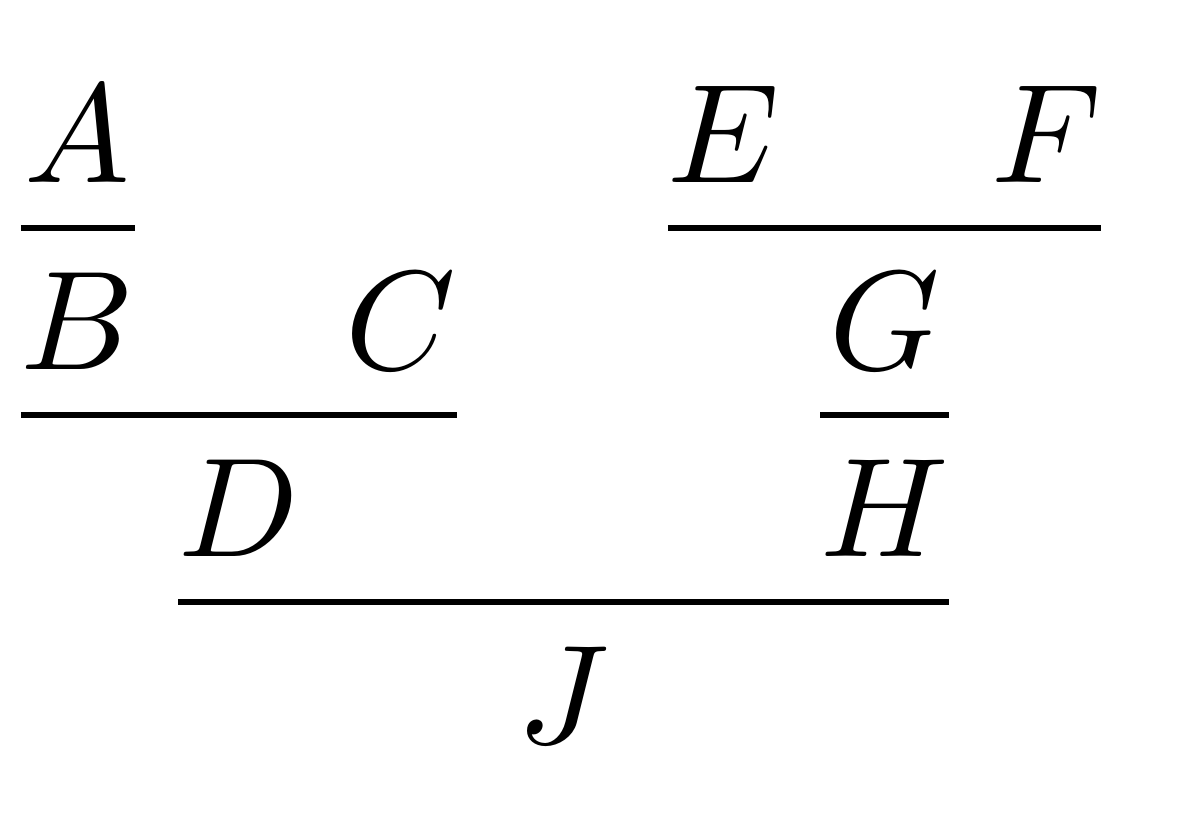 But the package allows many subtle modifications regarding style, alignment, labels, etc., making it the most modular option I am aware of.

Another question I missed. I began to use Paul Taylor's proof trees macros for my doctoral dissertation, but it has a bug that occurs when you want to use it with labels. This led me to write my own proof trees macros, which worked well enough. I should probably publish them one of these days.

Since then I've used Buss's macros, which are as good as any, although the stack metaphor for writing proof trees is not as intuitive as the grouping-oriented one of Paul Taylor's. But this is a very slight complaint.

All packages I've seen have one problem: they use Tex's boxes to set subdervivations, which means that they leave far too much space for many derivations, because they can't see that one subderivation could sit "in the shadow" of another. Sometimes this looks odd, sometimes it means you can't set large derivations without reducing font size. With negative horizontal spce, one can fix this, but this is a workaround.

The Right Thing is not to use boxes but trees to calculate how far apart to position the conclusion of subderivations. This can be done without much difficulty in Metapost —I'm not sure about PGF— and implementing this in Luatex library is on my list of rainy day projects.

Short addition: For those who like bussproofs for the generated output, but would rather prefer not to use the stack-based syntax, I've written a frontend for bussproofs allowing for the specification of proofs in an easy lisp-like syntax. Within this syntax, you can define custom operators including precedence information (such that the addition of parentheses is also handled by the tool). Proof are specified starting from the root, which also might be more intuitive for some people; still, they are rendered in the usual leaves-to-root manner.

which would be rendered to:

using, for instance, a one-liner as the following one (for the fish shell):

Advantages are the variable degree of abstraction (you can have plain LaTeX in a String and only define the structure by lisp brackets, or you can define a lot of macros and operations and have a tree with lisp-like elements only), the root-to-leaves notation which is still rendered as usual, and the extensibility to different renderers. A disadvantage is that you need yet another tool and cannot include it into your source code directly. Feel free to try it out ;)

Though not originally designed for proof trees, the synttree package is very nice and easy for drawing trees. 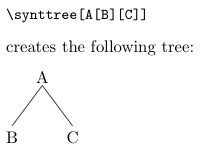 Also check out this page on Tree Drawing in LaTeX.

I have been using Paul Taylor's proof-tree package combined with some macros I have written myself. I have used the package for typeset proofs in papers, slides, my MSc thesis, problem sets and solutions.

People who need to typeset lots of trees may want to take a look at Dednat6, that understands 2D ascii art trees in blocks of comments. Dednat6 is not at CTAN yet, but there is a TUGBoat article about it. 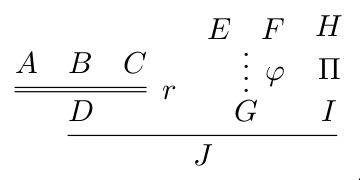 If you want to label your tree with the top answer here see this example:

Not the answer you're looking for? Browse other questions tagged packages logic or ask your own question.