Practical uses for skips with negative stretch or shrink components

I am currently looking somewhat carefully at how TeX manipulates skips, and I am having trouble finding practical use cases for skips with a negative stretch or shrink component, such as \Askip and \Bskip in the following.

They lead to odd situations. For instance, putting a skip with a large negative stretch component in a box that it somewhat underfull will cause other skips to shrink proportionally to their stretch component.

So, obviously this example is not useful, but are there some more useful examples of what negative glue can be used for?

In short, negative stretch and shrink can be combined with positive ones to “cancel out”, as mentioned by @egreg and @David. This makes it possible for the line-breaking algorithm to automatically make some complex choices.

That's really the full answer, but just to elaborate: There are some examples in The TeXbook, but such things are explained and organized better in the paper Breaking Paragraphs into Lines by Knuth and Plass (you can find it online; also reprinted in Digital Typography with some minor corrections).

The first example given in the paper is:

Although the box/glue/penalty model appears at first glance to be oriented solely to the problem of justified text, we shall now see that it is powerful enough to be adapted to the analogous problem of unjustified typesetting: [...] The idea is to let spaces between words be represented by the sequence

instead of the ‘glue(6,3,2)’ we used for justified typesetting. [...] If a break occurs at the penalty, there will be a stretchability of 18 units on the line, and the ‘glue(6,-18,0)’ will be discarded after the break so that the next line will begin flush left. On the other hand if no break occurs, the net effect is to have glue(6,0,0), representing a normal space with no stretching or shrinking.

To reproduce the above (sort of) with TeX syntax, compile the following with pdftex:

(This is not how \raggedright is implemented in TeX—that uses \rightskip—but this one adds stretchability on each line instead of constant space between words.)

As the paper goes on to show, the same idea can be used for inserting optional hyphens in ragged-right paragraphs, and for “ragged-centered” paragraphs:

Then this idea is used for typesetting computer programs at different widths simply by changing \hsize and nothing else: 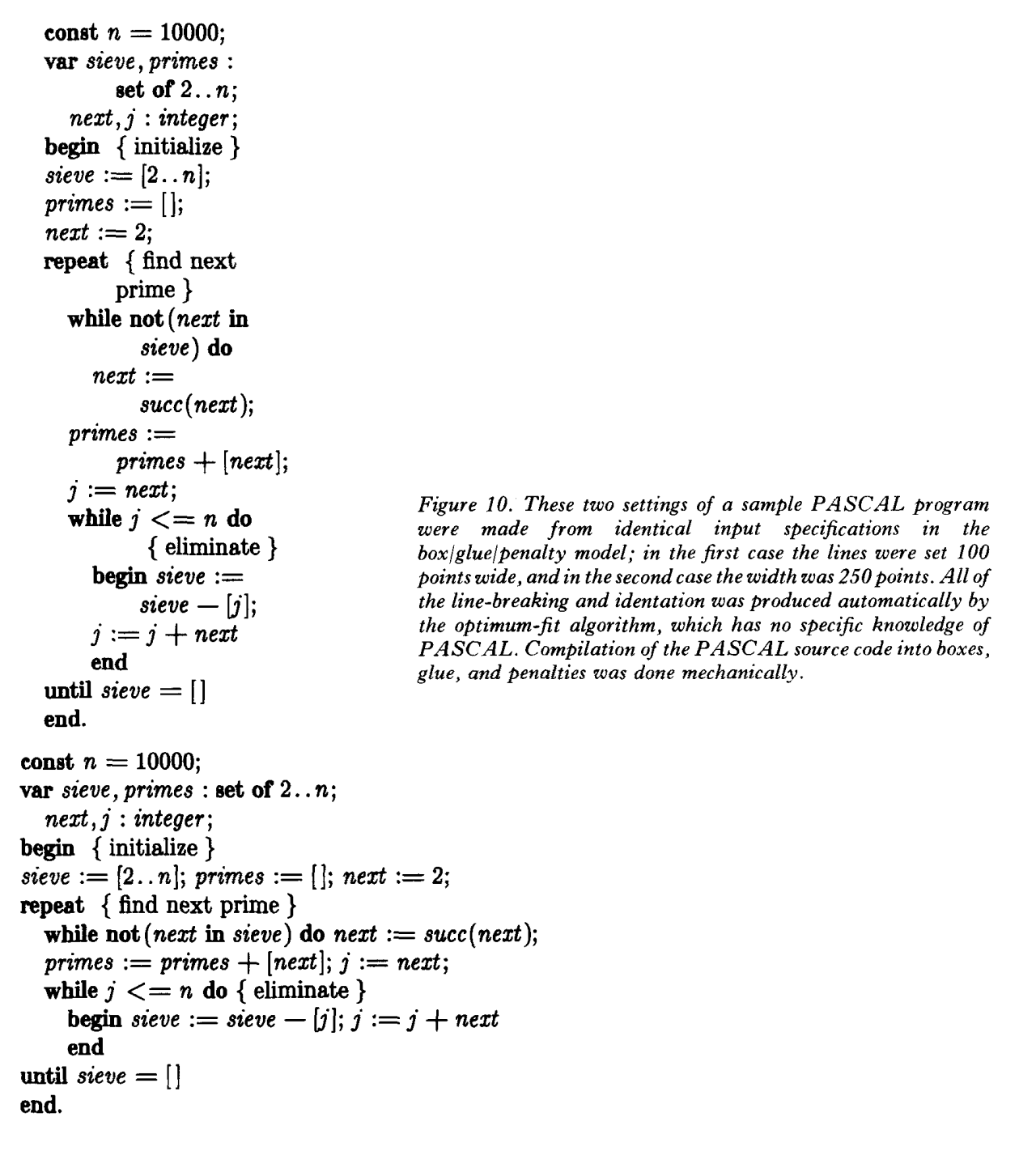 (Knuth wrote a preprocessor to generate the TeX files for these PASCAL programs; it was called BLAISE.)

The final application of line breaking that we shall study is the most difficult one that has so far been encountered by the authors; it was solved only after acquiring more than two years of experience with more straightforward line-breaking tasks, since the full power of the box/glue/penalty primitives was not immediately apparent.

And this is to typeset a certain index and get any of the following simply by varying \hsize: 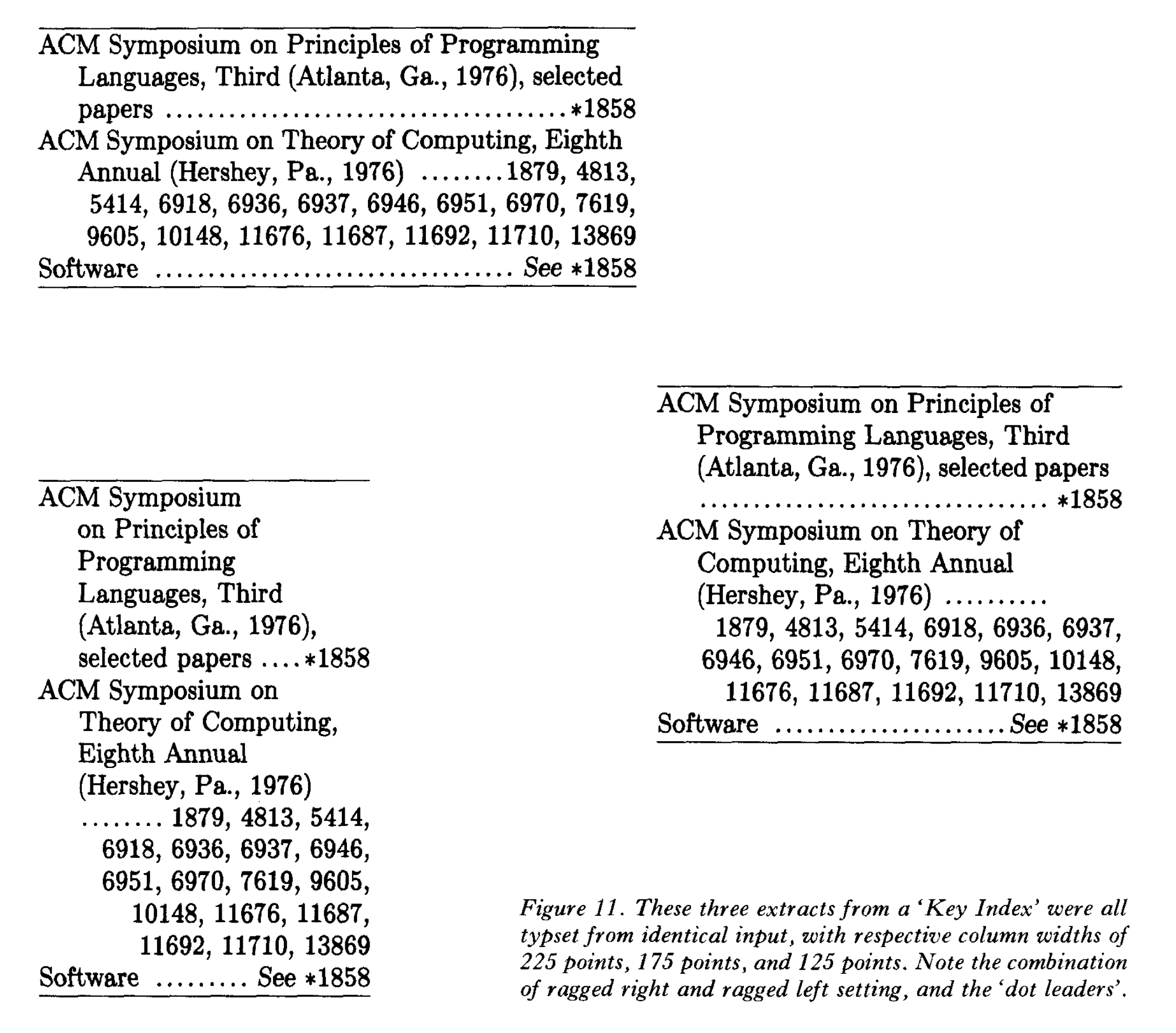 The features here in each entry are:

There's a way to achieve all this while keeping the input simply something like:

and negative stretch and shrink are involved in the solution: see the paper, or see the section “7. Paragraph maneuvers” in Appendix D: Dirty Tricks of the TeXbook, page 392–394. The paper goes on to give an “algebra” that can help one come up with the right tricks for such tasks.

As @egreg mentioned in comments, they are usually paired with equal positive values.

plain and latex both have

if the break happens the negative stretch is thrown away at the top of the next page, but if it does not happen, it counteracts the fil space before the penalty leaving zero total stretch.

maybe not exactly what is requested, but an absolute negative skip is useful in creating composite symbols, e.g.

it's also instructive to notice that \llap, \rlap, \clap and their vertical friends are all based on \hss or \vss which are primitives defined with infinite (positive) shrink and stretch. \llap is immensely useful for positioning page numbers flush right in a table of contents. and marginal notes couldn't exist without these facilities.

10
Alignment/whitespace to compensate for negative sign
73
difference between \vspace and \vspace* for negative arguments
4
Making integrals look prettier with negative spacing for publication
3
mdframed does not attempt to stretch or shrink vertical spaces within its content
1
How to shrink the gap between two images with a box between them
1
Documentation on the Algorithms or Techniques LaTeX uses for Text Layout
3
How to generalize \dotfill with a stretch factor?
0
How much negative space needed? To recognizably remove a space by letting something be added? For macros whose argument is another macro?
1
Auto wrap broken words without hyphens, zero all stretch/shrink inter-word intra-word glues in fully justified paragraph