How to use other fonts in plain tex using MikTeX?

What I would like to know is how to load other fonts not defined in plain TeX, and, since I'm using MiKTeX on Windows, how to find which other fonts are currently installed (and while we're at it, how to install new ones).

Is it just needed to write the font name in the command? And if so, how do I find these names?

I've been searching for this information on the internet, but have only found LaTeX related stuff.

Thanks for reading my question.

This answer is only partial to explain the fonts available from windows system that are natively accessible to XeLaTeX or LuaLaTeX other answers should address the Plain Tex Fonts Your first ports of call for primary TeX choices should be http://www.tug.dk/FontCatalogue/ and ftp://tug.ctan.org/pub/tex-archive/info/Free_Math_Font_Survey/survey.html

Your Windows system will have hundreds of fonts and the name you use in one area will likely be different in another.

This does not help to see what they look like or their working name e.g. towards the end of your list you should see in addition to verdana.ttf one called verdanai.ttf which will be used in place of Verdana when Italics is selected in an editor. To see the fonts visually either press windows key and then F O at which point you should be offered Font Previewer. or for the traditional folder view in file explorer address bar enter

Now I only see my 161 families to chose from. Again note NEITHER of these two viewers show the available character maps (there is a separate system tool to review and edit single characters.)

What the viewers do is let you compare styles and confirm system names such as "Comic Sans MS" which often trips users up as it is simply referenced as Comic Sans by many. 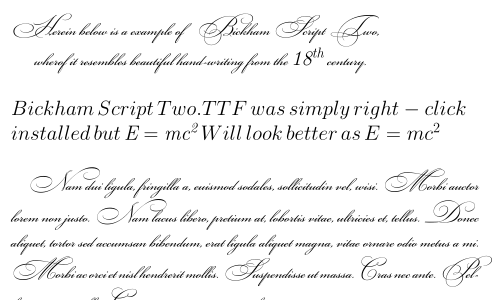 from How to install Bickham font or similar font

I only have TeXlive. there are usually lots of fonts in your distribution. you can find the tfm folders. some files like pagdc8t.tfm are in there. then you can use it by saying \font\cs=pagdc8t. System fonts are also available in plain-tex, I recommend XeTeX, you can define using

and there is a macro font-change-xetex,it provides some commands to specify a font, here is an example:

Not the answer you're looking for? Browse other questions tagged fonts miktex plain-tex or ask your own question.