I am trying to write a document using IEEEtrans document class. If I want to go from pdf to the tex source via inverse search, the cursor is always placed right before \end{document}, which is quite unuseful. I am using TeXStudio and forward-inverse-search is working with other documents without problems. Is it posible to get this working on IEEEtrans too?

This is a fuller answer than you require, however it is easiest for me to update this answer as other issues arise.

SyncTeX is an TeX editor enhancement function provided by the TeX engine rather than a basic TeX package, I will illustrate how SyncTeX is probably working correctly with your stated TeX editor (TeXstudio which has better than many other editors) support for the -synctex= command.

and not only highlight that line in grey but also momentarily highlight that word in yellow. As seen here. REMEMBER if you right click in the white space (margins etc) IT MAY drop to the \END, see below. 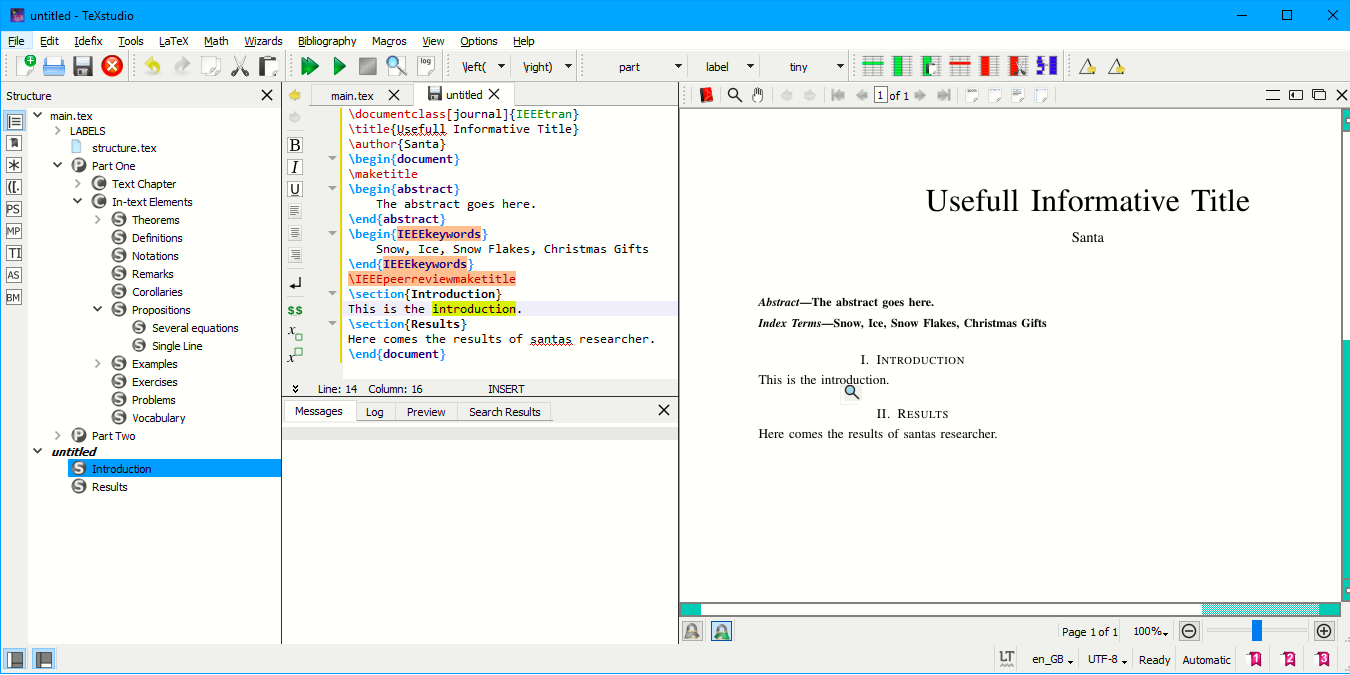 If TeXstudio (which version ?) is NOT doing that with THIS mwe, then you likely have one of two problems with synctex.

Either your TeX invocation is wrong when you run your mwe via tools commands PDFLaTeX or any of the equivalent icons and we would need to see how your command line differs from pdflatex.exe -synctex=1 -interaction=nonstopmode %.tex A silly value such as --synctex=--1 may fail silently check those are plain - whilst two at the start is sometimes advisable on some systems, there should only be one after the =

However as its showing you (when you right click PDF) Jump to editor, then it IS building a synctex file, ENSURE the filenames have no odd characters or spaces in their name etc. as these can trip up the functionality.

HINT in this case first go to Tools Clean Auxiliary Files... and select it, although it will not offer to delete the .synctex file it may help to remove others.

OR there may be a problem with the command within the TeX engine and we would need more details about OS platform TeX engine version etc.

Running PdfLaTex on the IEEE conference template it behaves as expected HOWEVER you will find that there are occasionally jumps to end of nearby locations rather that the expected position (this is normal for synctex when the pointers are not exact, often taking you to after the \include or \end{BlahBlah} line rather than the sub file contents or body of a \begin{…} \end{…} grouping)

When encountering some issues I always compare using TeXworks since it is the common default editor included with MiKTeX and TeX Live.

Using TeXworks and PdfLaTeX with the IEEE class I had no problems, however using LuaLaTeX, SyncTeX was less consistent, occasionally not seeing a valid back pointer and trying to open a none existent file.

I have to agree there are more likely issues using synctex with LuaLaTeX than I was previously aware of.

I therefore have to suggest this is a failing with the way TeXstudio is handing LuaLaTeX requests to MiKTeX since on the same machine TeXworks is syncing this IEEE class almost as well as can be expected.

I have to suggest it is a TeXstudio issue generating synctex from IEEE class via LuaLaTeX and their support is at https://github.com/texstudio-org/texstudio/issues

Not the answer you're looking for? Browse other questions tagged ieeetran forward-inverse-search or ask your own question.